Recent trips around Japan to the likes of Hiroshima in March and Nagasaki in April have given me the opportunity to ride around on their excellent trams and I guess I must have been feeling nostalgic for these street cars last month when I dragged my girlfriend along for a day riding one of only two tram lines in Tokyo!

There are 30 stations dotted along the Toden Arakawa Line which runs for a total distance of 7.6 miles (56 minutes) between Waseda and Minowabashi. For the record, the other one is the privately owned Tōkyū Setagaya Line in western Tokyo. The Arakawa line’s been in operation since 1974 and is the last survivor of the once dominant Toden street car system (about 20 lines at one time) but for how much longer will this one continue? Difficult to tell really as its certainly not losing passengers based on what we saw on this day trip. I guess it survives because of nostalgia, public pressure and the limited effect it has on some of Tokyo’s ordinary streets.

In the appendix of the latest John Rain thriller ‘Graveyard Of Memories‘, which is set in 1970’s Tokyo, author Barry Eisler recommended an excellent photo blog about the line called Lifetoreset and I’m very glad that I had a look at it before setting out on this densha journey.

The tiny end station of Minowabashi in the north east of Tokyo has quite a Showa-era feel to it and is quite hidden away from the roads and is famed for the colour and fragrance of its roses which run parallel to the platform. 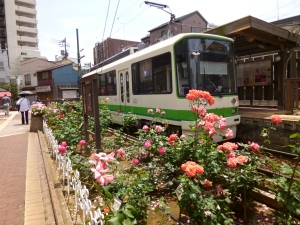 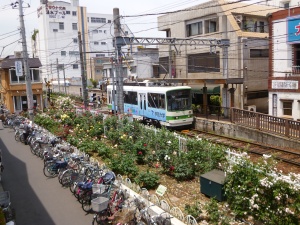 From there on the street car chugs along on a small railway which dissects some quiet, residential neighbourhoods that were pretty much all new to me. It was quite strange to travel through so many parts which were unknown to me and I really did feel like I was in a different city at times.

The best option for getting the most out of the line is the 400 yen day pass. If you just want to do a couple of journeys then the single ticket is better value at 170 yen whether you go one stop or ten stops! Ten stops away from Minowabashi is Odai which was our first true stop in terms of walking around the area a bit and when I say “a bit” I mean a bit as all we really did was cross the road for a brief look at the shrine before boarding the next tram! 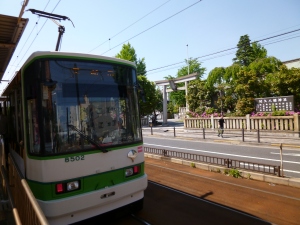 Arakawa Yuenchi-mae is the next stop down and a little more interesting. It is home to the Arakawa Amusement Park which is a small but treasured park built in 1950 and a good place to take the little ones for a fun and cheap (200 yen entry) day out in an area which is not so crowded.

Before you reach the park and the old streetcar on display outside it, you will pass a small pool area where kids can navigate their way over the water in tiny water cars using arm power! I’ve no idea what you call these things! 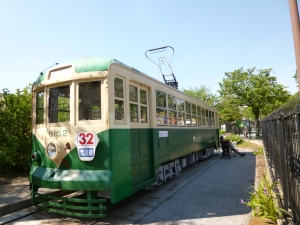 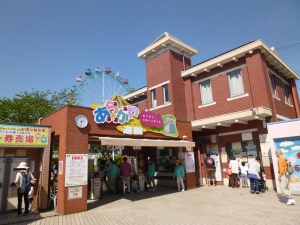 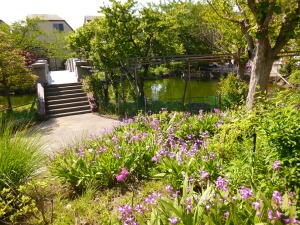 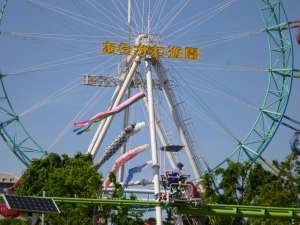 Back along the road that returns us to the station is a shop specialising in American goods and a bit further on past a couple of restaurants is a temple which caught my attention due to the swastika sign above it. No, its not a place to worship the Nazi Party of Germany but in Japan the controversial symbol actually denotes a Buddhist temple. The sign can be seen on street maps around Tokyo to denote such a thing.

Oji-Ekimae was our next port of call and an area where the tram line mixes with cars, buses, and trucks on the road going under the proper JR railway line. 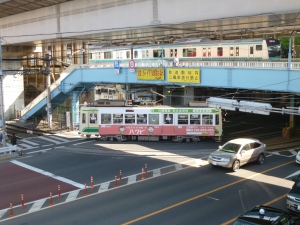 We crossed the road and found a small park amid some much needed shade with a very narrow stream ideal for soaking your feet in on a hot Summer’s day.

Oji Inari Shinto shrine is a brief de-tour up some steps from the stream and is probably not worth the climb for many! 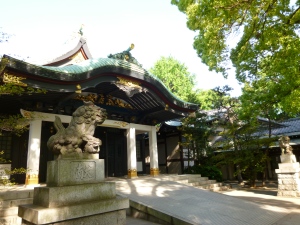 Just round the corner on top of a hill is Asukayama park which we reached via a small cable car (free) that elevates all up from the main street.

This is a very family-friendly and spacious green park full of young kids playing around in the playground which possesses an old, parked train carriage and engine along with a play area and an important stone monument which was erected a long, long time ago to commemorate the opening of the park. 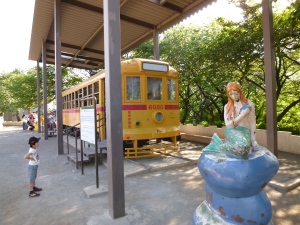 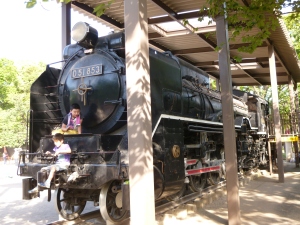 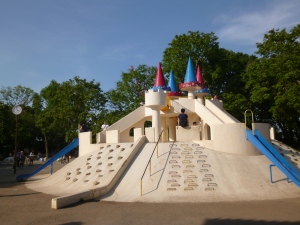 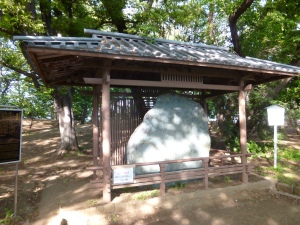 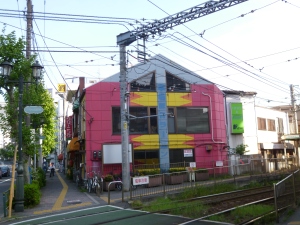 Next: Riding One Of Tokyo’s Last Surviving Tram Lines continues in Part II