Love him or hate him Steven Seagal films do a job. Admittedly its usually the same job and that is usually wooden acting, bad dialogue, unrealistic action scenes, pathetic plots and heavy duty martial arts action combat where the bad guys are taken on and defeated by the hero of the hour. It doesn’t take a genius to work out that ‘Into The Sun‘ is no different.

Its certainly no ‘Under Siege’ but this 2005 film is actually better than I thought it would be. It may be a fairly average film full of clichés but its entertaining enough with some magnificent Tokyo landscape on show including Shinjuku, Hamarikyu Gardens, Zojoji temple, Tsukiji fish market and Tokyo Tower. It starts off with a fairly pointless pre-titles action scene in Burma (in reality it was shot in Chiang Mai in Thailand) before the typical Asian strings kick in as the opening titles begin.

We then see the usual aerial shots of Tokyo and then a governor is suddenly assassinated and that can only mean its time for Seagal’s character to enter the scene and save the day. I can’t remember his name but that doesn’t really matter when he basically plays the same character in every film he ever does!

Here, he is an ex-CIA agent who is hired to track down the Yakuza (Japanese mafia) responsible for the killing. In true movie-style another agent is assigned to work with him who just doesn’t possess the knowledge and understanding of Japanese customs and the Yakuza that Seagal does.

What is really stupid is the choice of language used in some scenes. The Japanese and Chinese characters speak to each other in broken English and whilst Seagal’s character often speaks in Japanese he then uses English with his Japanese fiancée who communicates in Japanese. This fairly unconvincing romance develops amid the beauty of Hamarikyu Gardens and inevitably she is killed and it then becomes personal and he swears revenge on the bad guys. Such an original formula eh! 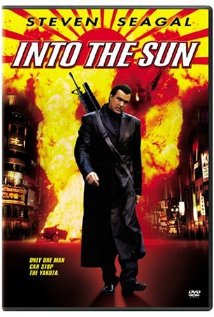