Jean Reno, of Mission Impossible fame, (the French guy with a beard) is a Cop who comes to Japan after he finds out his ex-Japanese girlfriend has died. The will is read out and what do you know but he has a daughter he never knew about. There’s some other weak plot about his ex having a secret past which lead to some unsavoury characters (naturally wearing black suits with dark glasses) being after his daughter.

Sure, this is your usual ‘fish out of water’ type film which foreign film-makers love and this French one is no different. Its a fairly fast-paced dumb action film which kept me entertained for its 90 minute duration with its cartoon-like comedy (when Reno punches people they fly back 20 metres!) and some pretty effective serious moments too.

The film gets its title from the sour green stuff used in sushi which Reno’s character thinks is a sauce or something and just eats it without any effect on him whatsoever which is amazing as this stuff is bloody strong as his partner Momo finds out to his cost! Apart from a short scene involving this there is no obvious reason why its called Wasabi. I guess its just a word that the producers think is Japanese-enough to let people know its a film with some Japanese reference.

As one review I saw on the internet said this may quite possibly be the greatest French-language, English-subtitled, Japanese action-comedy film of all time and I certainly can’t disagree with that statement! 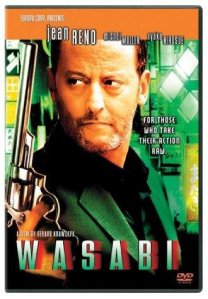