California Filming Locations #2: Back To The Future (1985)

Los Angeles plays host to many of the locations from ‘Back To The Future’ which starts off at Doctor Emmett Brown’s workshop where all the clocks go off 25 minutes early meaning Marty is late for school. What follows was an inspiration for me as a child as I took up skateboarding though being towed on the back of vehicles didn’t happen too often!

The workshop (below) was a temporary facade and can be made-out thanks to a diagonal stripe on the car park. 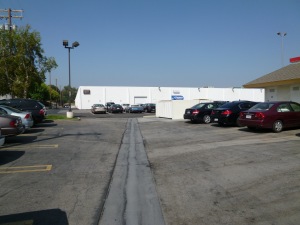 The Burger King (below) next to the workshop, which Marty skateboards past, is at 535 N. Victory Boulevard in Burbank. 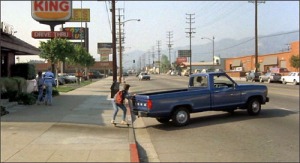 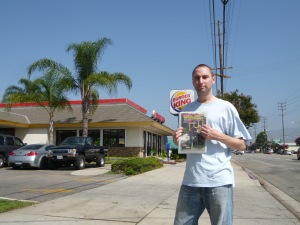 The skateboard route continue through Courthouse Square at Universal Studios Hollywood and finishes at Whittier High School at 12417 E. Philadelphia Street in Whittier. This was of course used as Hill Valley High School and appears on screen a few times during the film. 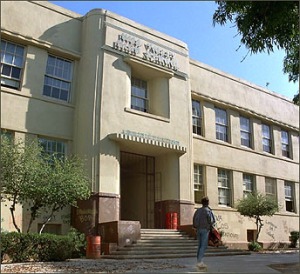 Having failed his audition for ‘Battle of the Bands’ Marty skateboards down his home street past going through the famous Lyon Estate signs which by luck I saw at Universal Studios due to the failure of our tram which lead to a slight detour. The street in the picture below is Sandusky Avenue. 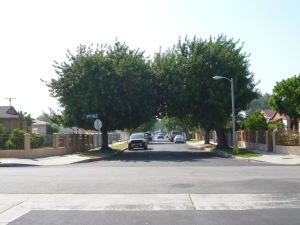 In reality though, Marty’s home (below) is a few streets away. The address for his home is 9303 Roslyndale Avenue in Arieta and is private property. 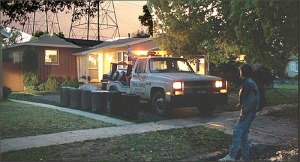 Marty agrees to meet the Doc at Twin Pines Mall (below) at 1.15am and the DeLorean time-machine is introduced to him. This was filmed at Puente Hills Mall at 1600 Asuza Avenue though sadly the JCPenney store has been replaced by a coat factory one. Whilst snapping away a cop wound down his window and said “Back to the future?” to which I replied “Of course” before he started going on about some event to mark the films 25th anniversary last year.

This location was the furthest out of the way for myself and Ethan but I felt it had to be seen as it played such an important part by way of being where Marty escapes from the hostile Libyan terrorists by driving at 88mph resulting in him being transported back to 1955.

On his entrance to 1955 Marty crashed into a barn and soon after that he discovers his 1985 street being built. All that exists is the “Lyon Estates” gates (below) and across the road from them is a sign saying its 2 miles to Hill Valley where the all-important clock tower is. The gates are at Universal Studios. 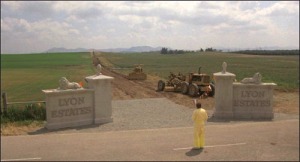 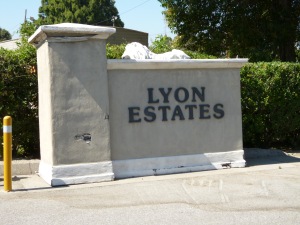 The clock tower (below) was damaged in a fire a few years ago and is no more but here is a photo I took of it back in 2002. 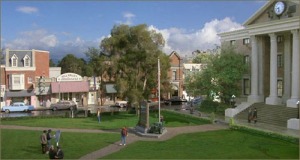 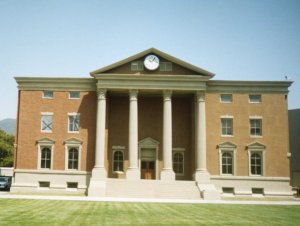 Having met his father George, Marty follows him and finds him up a tree (below) being a peeping Tom. The person he is spying on is his future wife Lorraine who is of course Marty’s mother. That house is at 1727 Bushnell Avenue in South Pasadena. 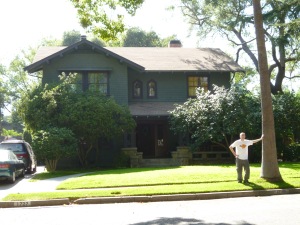 George’s house (below) is a few doors down the road at 1711 Bushnell Avenue. 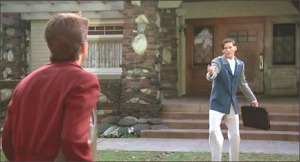 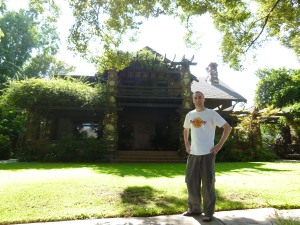 Marty later tracks down the Doc who lives at The Gamble House (of Proctor & Gamble fame) which is a Japanese-influenced wood shingle house at 4 Westmoreland Place in Pasadena. 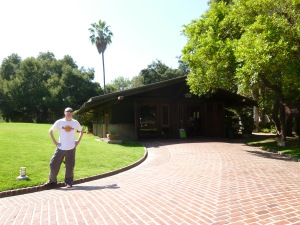 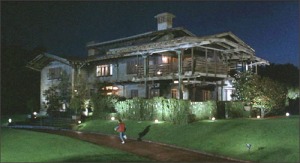 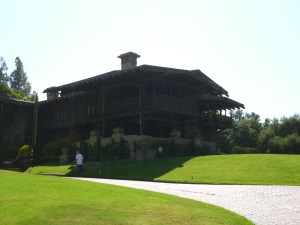 The film ends back on Marty’s street at Roslyndale Avenue where the Doc arrives from 2015 and utters the classic line to Jennifer and Marty “Roads. Where we’re going we don’t need roads!”. With that, the three of them shoot off into future (and the sequel film!) bringing my all-time favourite film to an end. 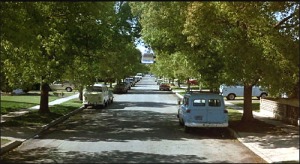 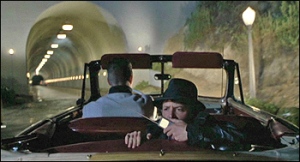 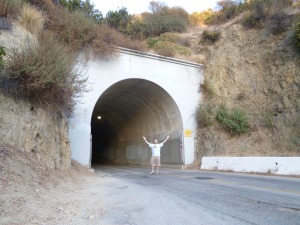 14 Responses to California Filming Locations #2: Back To The Future (1985)