The trip had been all about me so when it came to Ethan’s choice another theme park was on the cards though a more exhilerating one than the previous days trip to the calmer rides at Universal Studios. We left our hostel in L.A. behind at 7.30am and surprised ourselves by how quickly we reached our destination. As the park didn’t open till 10.30am we even had to kill a bit of time beforehand.

Once inside we picked up our Premium VIP flash-passes (or whatever they were called) which weren’t ‘front-of-the-line’ passes but supposedly reduced our waiting time for each ride by 90%. Of course we had to pay through-the-nose for such privilege but time is money I guess. Ethan was given some kind of gadget which you use to reserve your next ride and then it beeps back saying when its available which was almost always within seconds due to it not being the most busy of days.

This pass also didn’t include the new ‘Green Lantern’ spinning coaster ride but they said you could upgrade to include it for $15 which we did but then to our disgust we found out we could only fast-track our way through the queues on this ride once which they never mentioned in their spiel. 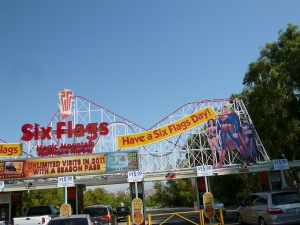 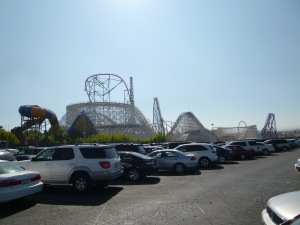 Our passes also allowed us to go on the same ride twice in succession but we soon realised that this wasn’t such a good thing as riding consecutively without much pause for breath makes you feel a bit sick. It was also a pain in the arse as we had to go through the confrontation with people who came to get on the ride to see we hadn’t moved which bemused them as they probably wasn’t aware of this special rule for us.

We went on many thrilling coaster rides with very little waiting as flashpass holders enter the ride by a different entrance each time which is basically the exit for everyone else! My favourite one had to be ‘Tatsu’ which is the worlds tallest, longest and fastest flying coaster according to their pamphlet. This was unique as you sat with your feet dangling before they rotated the seats so you were in a doggy-like position and thats the way we were whizzed around the coaster.

The park is notable for including a ride called ‘X2’ which is exactly the same as ‘eejanaika’ at Fujiku Highlands in Japan (the only two places in the world to have such a ride) which we both rode on when we visited that park in 2006 and 2008. Magic Mountain has actually appeared in several productions (usually representing a park other than itself) such as Knight Rider, Wonderwoman, Beverly Hills 90210 and Buffy the Vampire Slayer. I didn’t take my camera but I got Ethan to use his iPhone to take a couple of Batman-related photos which I wanted including the Batmobile below.

I don’t know why for sure but we both left the park not totally satisfied. Maybe it was because we didn’t have to build up anticipation for any rides or more likely it was to do with the money we had splashed out on the premium pass (a lesser pass would have been sufficient enough given the amount of people in the park that day) which we didn’t feel was totally worth it.