When my mum asked me a few months ago for some christmas present ideas I couldn’t really think of too much so I said I’d have a Leicester City shirt which is something I always used to get for my birthdays which coincided with the start of a new season. This list was presented in late October/early November at a time when Sven Goran Eriksson was still in charge. As I’m in Japan I thought I’d get Yuki Abe’s name on my back but since Nigel Pearson returned to the club he has been out of favour.  With rumors of him maybe returning to Japan to play, this shirt may only be valid for a short time though his inclusion in yesterday’s boxing day game was positive relief for me. 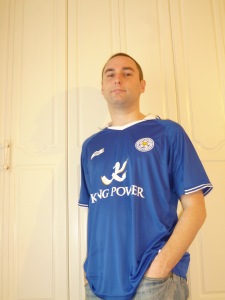 UPDATE: Yuki Abe left Leicester by mutual consent on January 22 and was announced as an Urawa Reds player with a #22 shirt a couple of days later. I thought that getting this shirt had been lucky for him as he played most of the games from Boxing Day onwards. Sadly, ths shirt didn’t stay up-to-date for more than a month!

8 Responses to Santa Brings Me The Latest Leicester Shirt