After three years away I returned to Hakuba in Nagano for a couple of days snowboarding this week. It was also my first trip away with Asif for nearly six years (due to him being away from Japan for that time!) after previous trips together to Seoul, Kyoto, Nokogiri-yama and Hakuba itself.

My last time snowboarding in 2010 was fairly disastrous so I was a bit apprehensive about such things happening again. For some reason our bus from Shinjuku was just a shuttle to Ikebukuro which we could so easily have done ourselves by train. Anyway, the bus was fairly empty so we could spread out a bit not that it helped me get more than a very short nap.

We were on the slopes at Happo-One (my first time on this mountain) in lovely sunny conditions between 9am and 4.30pm on day one and have the strange red burn marks on our faces to show for it! Other than a couple of ever-so-painful buttock splitting falls on my ar*e and a bit of cramp the day passed off without too many accidents.

Back at our hotel we had an onsen (hot spring bath) followed by dinner where we realised we were the only guests! Dinner didn’t pass without incident as I dropped a spoonful of rice in my green tea whilst Asif set light to his chopstick trying to put out the cooker fire and no I have no idea what he was trying to do either!

We were in bed (no not together) and instantly asleep at 9am and though I woke up at 3 or 4am I fell back to sleep and could have slept (or rather stayed lying down!) for a lot longer! It was snowing on day two as indeed it was back in Tokyo which I was aware of thanks to snow (ouch!) many Facebook updates. So much for getting away for a couple of days of snow! The day did improve weather-wise and we bumped into a group of colleagues which was nice albeit brief. 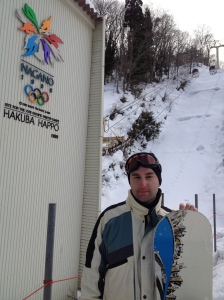 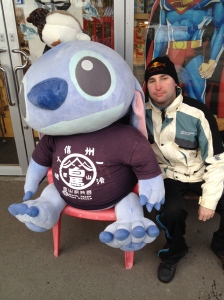 I think my carving skills have improved a bit but I still lack the real bravery needed to bomb it down the slopes slicing across the slopes from side to side. I was still suffering quite regular cramp and had a reoccurrence of last years shin/calf problems. Two days was nice but in all honesty I could have left after just the one day without too many regrets. Asif summed up the experience more succinctly saying he was just happy to have come back in one piece!

You can see my previous Hakuba trip reports by clicking on the links below:

1 Response to Back To Hakuba