As someone who can’t drive and has no interest in cars I had no interest in this franchise for many many years and just assumed it was dumbed-down, brain-dead, lad-popularist titilation designed for people…..well people like me who have a short attention span and just wanna see some mindless action and car chases on screen for an hour and a half. That probably still stands true but despite my scepticism and desperate urge to hate these films I have somehow ended up enjoying them. I have seen four of the five films thus far in a real random order starting with the third installment thanks to the obvious Japan connection. 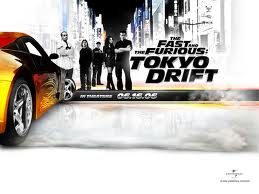 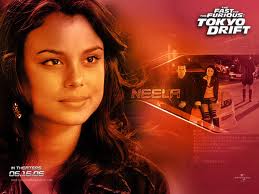 Last years ‘Fast Five‘ was the guilty pleasure of the year and surprised not only me but many others too given its rating on sites likes Imdb and Rotten Tomatoes. Since then I have gone on to see the first two ‘Fast and Furious‘ films and so now seems like a good time to take a closer look at the ‘Tokyo Drift‘ one which is supposedly set after the fifth one on its timeline.

Needless to say, the script and story are hideous. The acting is on a par with that of Vin Diesel and Paul Walker which is to say that it is equally awful but I never got bored during the film and probably by the end of it just about got more than I bargained for from it.

Like all international films which come to Tokyo it seems that Shibuya Crossing has to feature and whilst the real one is seen for a scene or two its quite clearly not the real thing when we see one of the most absurd car chase scenes supposedly disperse the masses of people who cross in all directions every three minutes.

This time the action follows Sean (Lucas Black) who plays an American tearaway who comes to Tokyo to live with his military father in order to avoid a jail term (why? who knows!) and inevitably he gets caught up in the underground world of drift racing in a low-rent area of the Japanese capital. To his credit, Sean is a white guy who makes more of an effort to fit in with the Japanese culture than usually happens in these ‘fish out of water’ movies where they usually make fun of or perhaps begrudgingly accept things.

Main protagonist DK is easy to dislike and the other main Asian-American character is Han who helps Sean adapt to Japanese society but I’ve always thought of him as someone who brings very little to the franchise other than ticking the box for having an Asian-looking person in the film. Probably not his fault but down to the producers not giving him anything too exciting to do.

Overall this third instalment is just about above the satisfactory mark, despite its cheesy dialogue, but just be sure to park your brains outside before you watch this flick!