Back in 2001-02 I spent a year travelling around Australia with the emphasis very much placed on the word ‘around’ meaning that I never bothered to go to the centre. With the exchange rate half that of eleven years ago it gives one even more reason to not visit Alice Springs as its so expensive to leave the coast, get to the middle, do some tours and then get back to the coastal cities. However, as it was the only major area I hadn’t covered I decided to cough up the money as there would be no greater time to go given the time-off which I’d been granted by my work.

Arriving in Australia’s centre just before midday I took a bus from the airport before ending up at ‘Annies Place’ backpackers and then I was out fairly promptly to book the following days tour. After that I walked up to Anzac Hill which may have been a very small hill but it was one which offered some great views across the small town of Alice. 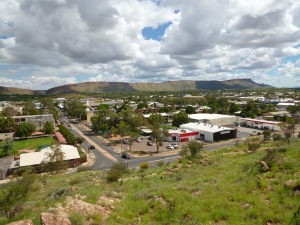 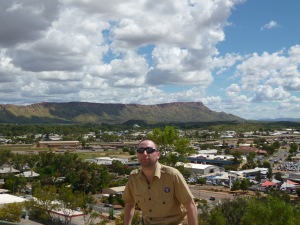 The Royal Flying Doctor Service followed after that which was very interesting and brought back memories of the late 1980s when the BBC had on a show called ‘The Flying Doctors‘ which I vaguely remember watching. Amazing to hear about how this unique non profit organisation provides routine medical services to the isolated areas of the outback. 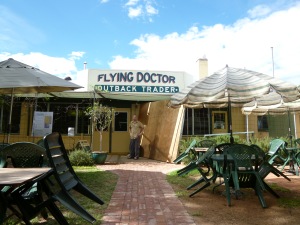 Across the road from there was the Reptile Centre. I popped my head round the door more out of curiosity than anything else almost hoping that I’d missed the last session of the day so that I didn’t have to spend $12 on the entrance. However, the lady said I was just in time. Only a day or two later did I realise how lucky I’d been to experience it as there are only three demonstrations a day. We got to hold three reptiles; a blue tongued lizard, a snake and a gecko…..I think! Anyway, it was an entertaining afternoon and really good fun as we were able to hold on (if we wished!) to them for more than the usual five second photo opportunity which often exists for such an activity.

Despite my feet suffering from a few blisters caused by my sandals I took a fairly long walk early evening to Lasseters Hotel Casino but not to gamble. No, I went there purely and solely because it featured briefly in ‘The Adventures of Priscilla: Queen of the Desert‘ in 1994 and was the place where the trio of drag queens put on a performance at.