Starting off with a hard techno beat and flashing credits this arty-farty French directed film comes across as tediously excruciating with any real story replaced by indulgence for the sake of art.

We see all the action through the eyes of the main character Oscar in ‘Peep Show‘ style and I’d also compare it to watching ‘Big Brother‘ Live as there are times when the characters are just chatting or not doing much in a film which certainly doesn’t rush in its pacing. At 154 minutes in length (it was originally 10 minutes longer than that!) it is unnecessarily long and could surely have been edited down to a more respectable time. Whereas ‘Peep Show‘ has two main characters and a strong support cast this film only has one main (weak) character who we see very little of meaning that the film has very little to focus on in terms of characters and instead we have to suffer constant dreamy, hallucinogenic scenes for a frustrating amount of time. Don’t expect to see any recognisable places in Tokyo whatsoever either. As for character development, don’t make me laugh! There really is no one to care about in this film…or a story for that matter!

Still reading? If so then the movie centres around Oscar; a drug dealer living in Tokyo who goes to a bar called ‘The Void’ to deliver some drugs to a guy who has grassed him up (the probable reason why is explained later) as the police raid within seconds of his arrival. Locking himself in the toilet Oscar is unable to flush the drugs away and tells the police he has a gun in the hope he’ll get more time but instead he gets shot through the door and then the film becomes weirder and weirder.

On the way to the bar that fateful night Oscar’s mate Alex had been talking a lot about ‘The Tibetan Book of the Dead’ which is a Buddhist book about the afterlife and he refers particularly to how the spirit of a dead person sometimes stays among the living until it begins to experience nightmares, after which it attempts to reincarnate. After being shot Oscar’s body (who we had only ever really seen from his view-point) rises from him and he floats his way through his life in chronological order. This includes the backstory of his family particularly his sister and how they both ended up in Tokyo. What follows includes some pretty f*cked up sh*t such as travelling inside his sisters vagina to witness his mate Alex thrusting and then ejaculating and we lucky viewers get to follow the semen into the fertilisation of his sister’s ovum.

If you are disturbed by strobe effects, shaky hand-held cameras, psychedelic images, abortion, breast-feeeding, drug use, graphic sex, blood and so on over the course of two and a half hours then this is definitely not the film for you. If you do like any of that stuff then there are way better films out there catering for such topics. Avoid the void. 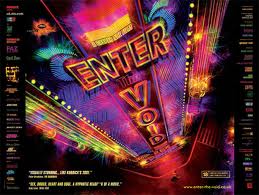 A Leicester City fan teaching English in Japan
View all posts by tokyofox →
This entry was posted in Films, Review: Films Set In Japan and tagged drugs, enter the void, films set in Japan, films set in tokyo, french film, the afterlife, tokyo. Bookmark the permalink.