‘The Man With the Golden Gun‘ (1974) doesn’t follow the original novel too closely as that was set in Jamaica whereas the film is located in the Far East. It is a fairly entertaining story for a number of reasons; a great villain in the form of  Scaramanga; a classic henchman in the shape of psycho dwarf Nick Nack; a beautiful Bond girl and of course the exotic locations of Thailand, Macau and Hong Kong.

The Hong Kong-Macau Ferry Terminal (below) is seen on 26 minutes but in the present day it’s all very different apart from the location. The terminal is now part of the Shun Tak Centre shopping mall. 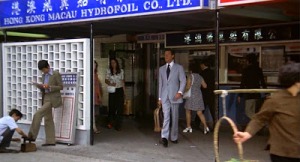 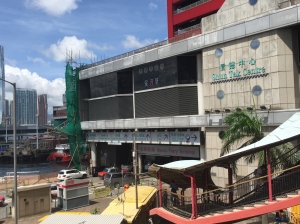 Bond tries to get in a taxi just over the road from there with the Western Market (below) visible in the background. The address is 323 Des Voeux Road Central but the it’s the Connaught Road Central side close to Sheung Wan MTR station which is seen on screen on 27 minutes.

The Peninsula Hotel (below) on Salisbury Road in Tsim Sha Tsui is on the other side of the harbour and just a stones throw from the ferry terminal on Kowloon. 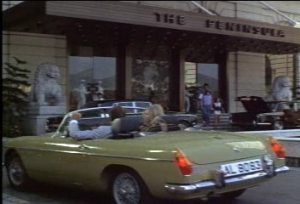 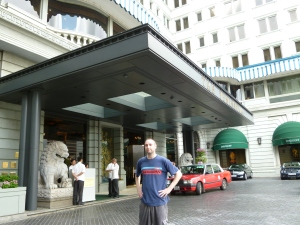 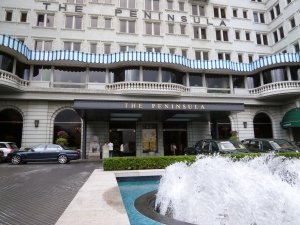 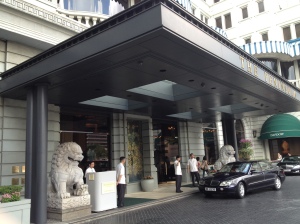 I even went inside the hotel and took the elevator up to the top floor to see the very room which Roger Moore’s 007 entered with a bit of help from a staff member. In the film it is where Bond tracks down Scaramanga’s mistress Miss Andreas Anders’ who had been collecting gold bullets at a Macau casino room. It is room 602 (below) where he puts pressure on her to inform him of Scramanga’s appearance and plans.

Bottoms Up bar, which can be seen on 33 minutes, is long gone from its location at 14 Hankow Road and what’s in its place really wasn’t even worth a photo as the area is pretty much unrecognisable to that seen in the movie. Not surprising I guess as it has been nearly 40 years!

Another Hong Kong location from ‘The Man With The Golden Gun‘ is Dragon Garden on Castle Peak Road in the New Territories area. This played the part of Thai entrepreneur Hai Fat’s house where Bond pretends that he is Scaramanga. It is seen quite extensively from the 44 minute mark when Bonds plan backfires as Scaramanga himself is already at the same house. It’s on to Thailand after that with the most famous locale being Scaramanga’s lair on Ko Khao Phing Kan near Phuket.

In ‘Die Another Day‘ (2002) Hong Kong island appears as Pierce Brosnan’s Bond escapes captivity, jumps into the Harbour and emerges at the Hong Kong Yacht Club (27 mins) which is located on the north side of the island. However, this was not all it seemed as it wasn’t Kowloon that could be seen in the background but Hong Kong island itself. Obviously this was all faked on a movie set and furthermore the shaggily unshaven 007 turns up at the Royal Rubyeon Hotel which doesn’t exist at all. 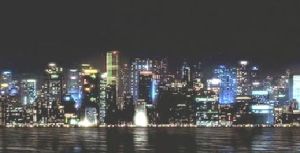 ‘Tomorrow Never Dies‘ (1997) brought about a different kind of Bond girl and not just because it was the first time the lady was Asian. She was a girl with attitude and an ability to fight unlike the typical dolly-birds who had preceded Michelle Yeoh. There is a waxwork model of the Malaysian actress outside the entrance to Madame Tussauds Waxwork Museum at The Peak. Yeoh, who also starred in ‘Crouching Tiger, Hidden Dragon‘ (2000) and ‘Memoirs of a Geisha‘ (2005) among others, has a star with her name and handprint on the Avenue of Stars along Hong Kong’s famous harbour front. 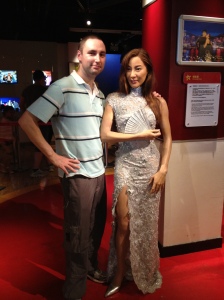 See other James Bond filming locations by clicking on the cities below: