Thailand’s capital city has featured in a couple of James Bond films; ‘The Man With The Golden Gun‘ (1974) and ‘Tomorrow Never Dies‘ (1997), although Bangkok was used to portray Saigon in Vietnam in the latter.

I think I’ve mentioned on here before that ‘Tomorrow Never Dies‘ was the first 007 flick I actually saw in its entirety and I haven’t looked back since. This film not only opened up my eyes to Bond but to Asia too which, at that time in my life, was a continent I was still very ignorant of. 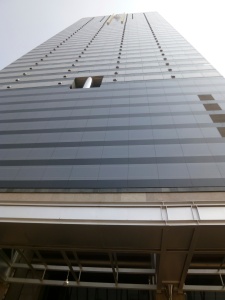 Many websites state that the skyscraper which Bond (Pierce Brosnan) and Wai Lin (Michelle Yeoh) descend (above) on 77 minutes on a banner is the Westin Banyan Tree Hotel (21/100 South Sathorn Road, Sathorn) BUT it is actually the Sinn Sathorn Tower on Krung Thonbrui Road, a kilometre down the road, where they make their escape on motorbike (below) leading to what provided the films most memorable action scenes. The building is used as an office and as I looked up at the 44 floor tower to compare it with the screenshots on my phone I could see that it was the same albeit with a little CGI treatment towards its peak. Although, I’m still not 100% sure that it is the building which they jumped off, I have no doubt that it was used for the ground level shots.

Over two decades prior to that, the Bond production team were in town in 1973 working on ‘The Man With The Golden Gun‘ (1974) in and around Bangkok and perhaps more famously Khao Ping Gan a.k.a. James Bond Island, which first appears on 95 mins, and is  where I visited on my last trip to Thailand in 2008.

This ninth 007 movie sees Bond on location in Macau, Hong Kong (see those locations here) and Thailand where he’s on the trail of Scaramanga (Christopher Lee) and after his plan to pose as the villain backfires, he is captured and placed in Thai entrepreneur Hai Fat’s dojo where the fighters are instructed to kill him. This was filmed at Muang Boran a.k.a. Ancient Siam (formerly known as Ancient City) in Samut Prakan province. This place, which is the worlds largest outdoor museum, is first seen on 52 minutes and sticks around for some action scenes lasting about six minutes. It was quite amazing how similar this place still looks given the number of decades that have passed since it was filmed. I guess the flagstones in the screenshots (below) were laid by the production team and a huge plant feature now stands in the way of creating a better match-up. 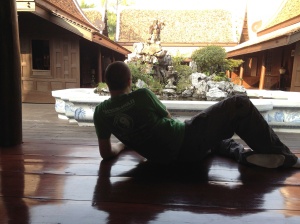 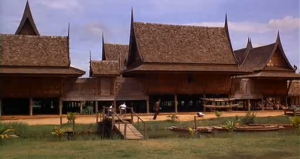 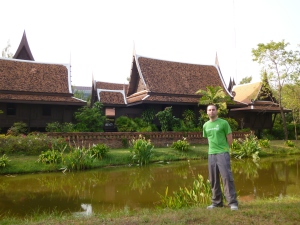 To be even more precise these scenes were shot at The Dvaravati House which is #18 on the map given when you purchase your ticket. There was absolutely no information on the net about which part of Muang Boran was used in the Bond film so I was well happy when I noticed the building just as we were on our way towards the exit. There is no wooden bridge going over the moat so maybe that was just added by the props department. Who knows? 40 years is a long time so it may have been there back in the 1970s for all we know!

Bond escapes from the Karate School at Muang Boran with the aid of Lt. Hip and his martial art expert nieces and the ensuing boat chase continues on to Damnoen Saduak Floating Market (below) which is over 100km away! From there it goes down Klong Dan (60 minutes) with just about everyone apart from Bond ending up in the water. 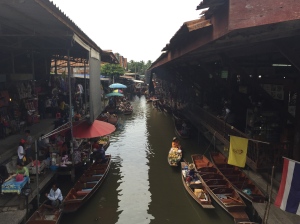 It’s at the Mandarin Oriental Hotel on 65 minutes (below) where Bond is reunited with his British assistant Mary Goodnight. They share dinner but inevitably their evening is interrupted. Anders (Maud Adams) tells Bond that she wants him to kill Scaramanga and will pay him at a boxing venue the next day. 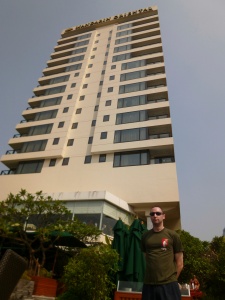 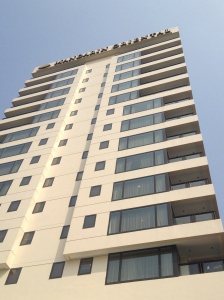 Many internet sites say that the Boxing Stadium featured on 74 minutes, where Bond discovers Anders dead and meets Scaramanga, was Lumpini Stadium but as 007 exits the place you can see a sign saying that its Ratchadamnoen Stadium. Other sources say that the fighting scenes were shot at Lumpini but the filming was done at Ratchadamnoen but I’m not sure which one. I only had time to visit the former and of course it wasn’t open when I was there so its just more exterior shots I’m afraid! 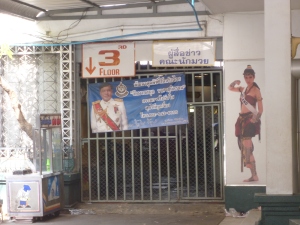 The car chase which follows from outside the stadium was shot in the car park at Royal Turf Club and sees them briefly driving with Giant Swing (below) and Wat Suthat in the background. 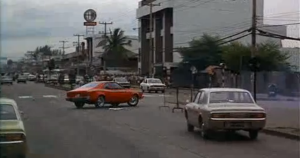 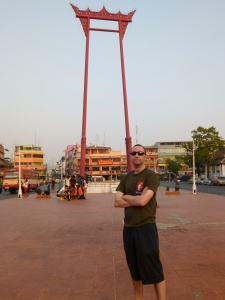 The dual with Scaramanga on James Bond Island takes place on 105 mins and is perhaps the films most iconic image. Near to Siam Center are a few signboards giving basic details of how Thailand has featured in movies over the years. Of course there was one for ‘The Beach‘ (2000) and there was also one for James Bond giving brief details of what you’ve read in this entry! 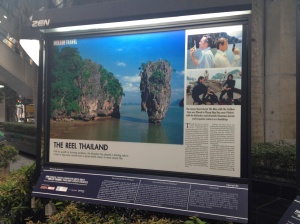 See other James Bond filming locations by clicking on the links below: