This 2011 sequel was yet another typical example of scriptwriters being lazy and cashing in on the success of the original. In this case, the plot was very similar to the  2009 ‘Hangover‘ movie but with one difference; it was shot overseas in an exotic location which is the classic fallback when ideas are lacking.

Personally, I can’t say I ever really understood what all the fuss was about regarding the original ‘Hangover’ film. I thought it was okay but not as funny as everyone else seemed to think and it has to be said that ‘The Hangover Part II‘ (to give it its full title) was really lame and needless to say that I didn’t even bother with the third one last year! However, Tokyo Fox has a job to do and that’s to provide you the reader with as much detail as possible for tracking down its movie locations. Besides, its still fun seeking out these places whether you like the film or not!

So basically The Wolfpack are in Bangkok to celebrate Stu’s (Ed Helms) impending wedding and a typical aerial shot of the city at night appears on 24 minutes and that’s pretty much where the story begins. The gang, along with Lauren’s younger brother Teddy, wake up in a dirty hotel room alongside a chain-smoking monkey and with Stu’s face tattooed like Mike Tyson’s. They all congregate on the roof of the Lebua Hotel (below) 35 minutes in and try to fill in the gaps to see what happened the night before.

A couple of minutes later (37 mins) and they’re in Chinatown on Thanon Plaeng Nam (below) which is a lane where you can get famous dishes like shark fin and bird’s nest. It is nowhere near as hectic as its depiction on screen. If you see the red and white Rubber Stamp sign then you’re on the right street and the blue road sign above Phil’s (Bradley Cooper) shoulder is for Soi Phiphaksa 1. The nearest station is Hua Lamphong MRT station and from there its about a ten minute walk.

A clue leads them to Sukhumvit Soi 7/1 (below) near Nana BTS station (41 mins) where they are, to their surprise, given a hostile reception. They come across the place in which Stu got his face tattooed the previous night. Sadly this tattoo parlour was purpose built for the film so there’s not too much to see on this street.

Hoping to return the mute monk in a wheelchair they acquired by accident they take a songthaew truck to Muang Boran (Ancient Siam, formerly known as Ancient City) on 45 minutes which doubles up in this film as a Chinese temple. This is the same place which featured in ‘The Man With The Golden Gun‘ (1974) but unlike that movie, this one is recognised in the reception area where there’s a wall display informing the public of what has been filmed there. The Phra Kaew Pavillion (below) is stop #30 on the map (given as part of the entry fee) and an open pavilion was added to create the atmosphere although no stick-wielding Chinese monks were on hand to greet us on our arrival! The Phra Kaew Pavilion was built to represent Ayutthaya as a centre of Buddhism in the past. Encouraged by the head monk to meditate before they leave results in Alan (Zach Galifianakis) having a juvenile vision which leads them to their next location. 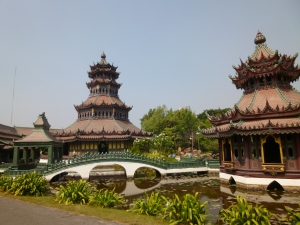 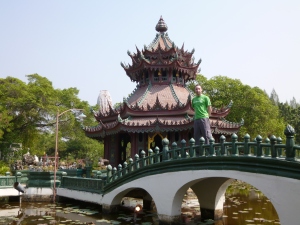 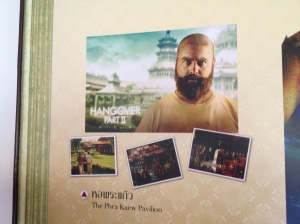 That place happens to be a strip club which is on Soi Cowboy (50 mins). They stand at the entrance to “Siam Sam’s” which in reality is Cactus Bar (below) although the interior shots were filmed elsewhere. 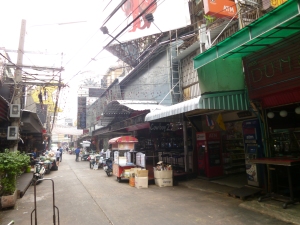 Sirocco restaurant on the 64th floor of Lebua State Lounge is seen on 62 minutes and again on 76 mins. Since filming wrapped the restaurant and the adjacent bar have been offering Hangovertini cocktails for 490 BHT ($15). Be aware that if you want to enter this restaurant that there is a strict dress code which must be adhered to.

The hotel is really using the Hangover fame to its advantage as they also offer a special two-night “The Hangover Part II” package priced at $2,200. Furthermore, there is the opportunity for rich fans to stay in “The Hangover Suite” which is a three-bedroom luxury room accommodating up to six guests with a fully-stocked mini-bar and ample party space.

A single small tree marks the traffic circle known as Wat San Road roundabout which appears on 69 minutes as the place where they encounter the drug dealing monkey which they subsequently steal before a car chase ensues which culminates in a ridiculous stunt which sees the car manage to jump over a river! The seven streets leading out from the roundabout had to be closed for filming. To get there yourself you have to take the Chao Phraya Express boat to Ratchawongse and hang right at the first turning and then its nearly a ten minute walk. 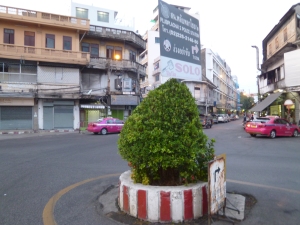 The wedding between Stu and Lauren takes place after that in Krabi at Phulay Bay Resort which is owned by Ritz-Carlton. It has 54 one-bedroom villas with private pools, outdoor baths, butler service all available at sky-high prices!

6 Responses to The Hangover Part II Filming Locations In Bangkok