This is a first for me in that I have actually scouted out a very current film; one that I only saw at its World Premiere in Tokyo in June. Peter Parker (Andrew Garfield) lives with his Aunt May (Sally Field) and Uncle Ben (Martin Sheen) in Brooklyn at 36 Fuller Place (below) which is just a couple of minutes walk away from 15 St – Prospect Park (F, G lines) metro station.

Sadly the screenshot below doesn’t reveal too much of this house as it was a nighttime shot.

The entrance and lobby of Dr Curt Connors’ (Rhys Ifans) high-tech lab at ‘Oscorp’ (below) is the Hearst Building on 300 West 57th Street at 8th Avenue. 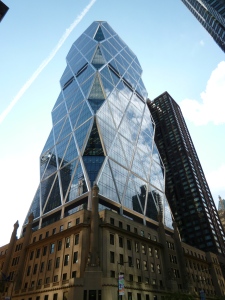 Captain George Stacy’s (Denis Leary) workplace is the National Museum of the American Indian (below) on 1 Bowling Green at Broadway which has a rich film history already having appeared in ‘Ghostbusters II‘ and ‘Batman Forever‘. 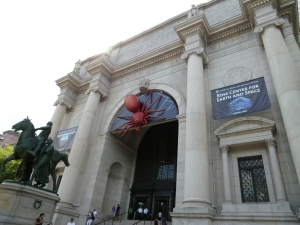 As for his apartment, that is at at 15 West 81st Street (below) and is pretty nice looking with some great views which can be seen in the film when Peter Parker and Stacy’s daughter Gwen (Emma Stone) kiss on the balcony after he reveals his true identity. That followed a tense conversation between Parker and Captain Stacey over Spider-Man’s motives.