Carrie Bradshaw’s (Sarah Jessica Parker) apartment is given as East 73rd Street in the TV series but is actually 66 Perry Street at West 4th Street in Greenwich Village. As expected the steps were chained off to stop fans from sitting on the steps or whatever. A black box asking for charity donations in return for the photos you take is a small price to pay for a photo op at one of TV”s most famous apartments.

I never saw the actual episode in which The Magnolia Bakery featured but research tells me it was season 3 episode 5 and was titled “No Ifs, Ands, Or Butts.” The reason I knew about this place was thanks to a CNN news feature story about the place and the cup cake craze which started following its appearance in the series. The shop can be found at 401 Bleeker Street and is actually just round the corner from Carrie’s apartment. There may be no bench or seats outside but other than that it looks pretty much identical now. 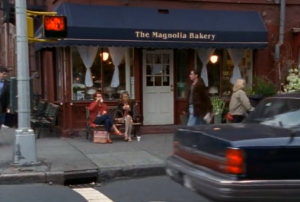 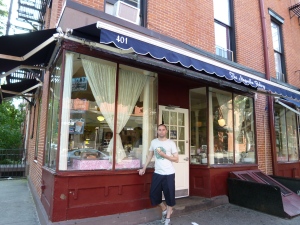 Whilst on the subject of SATC I may as well use this opportunity to say that I did see some of the first film on a plane a few years ago. I say some as I fell asleep for most of it! The sequel ‘SATC 2’ gave me great pleasure too and thats without even seeing any of it! Mark Kermode’s rant about this film on the excellent ‘Kermode & Mayo’s Film Review’ show on BBC Radio 5 Live was fantastic radio. Watch it here.