Myanmar? Burma? Which is the correct one, I really don’t know but then again my knowledge of all things Burmese is very minimal. That is slowly changing due to one of my students bringing in articles about Aung San Suu Kyi to discuss a few months ago. I was very intrigued by her amazing story and about the country itself so with this heightened interest I went for some Burmese food after work last Wednesday with Mostyn, my guest in tow! 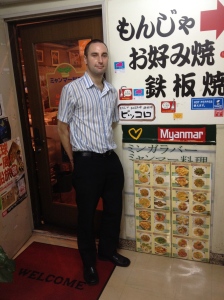 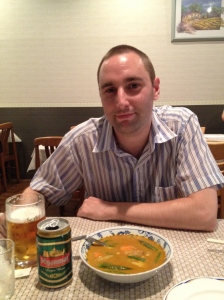 I was surprised to learn recently that there are at least six Burmese restaurants in Takadanobaba with us choosing Mingalaba at 2-14-8 Takadanoba (3F) as it was close to the station and its name seemed the funniest. Naturally we started with a couple of cans of Myanmar beer at 550 yen a piece and then set about ordering some local Burmese food from the very nice lady working there. 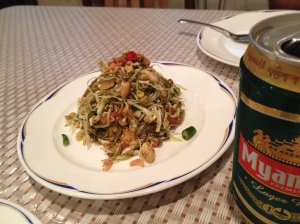 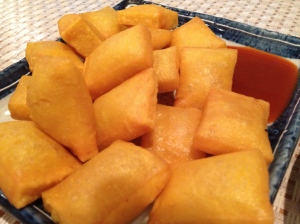 For starters we had la pet thop (mixed tea leaf salad) but little did I know that it was covered in peanuts so I only picked at that one a bit. La Pet Thop boys, as Mostyn and I will be called from now on, then worked our way through to fu cho (fried yellow tofu), pei kala hinn (yellow pea and vegetable curry) and nang jii thop (thick flour noodles with chicken and lemon sauce). All of these were really really lovely and a few more beers were washed down in a place which had a nice atmosphere with a couple of other groups in the place. 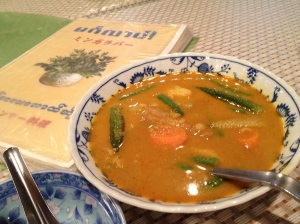 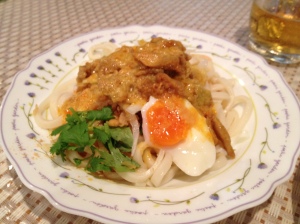 Before going to this restaurant I had watched ‘The Lady‘ starring Michelle Yeoh (former Bond girl and star of ‘Memoirs of a Geisha‘) which only just came out in Japan a couple of months ago albeit with a very limited release. I watched the 2011 film on YouTube which was ok when the film was in English but there were no subtitles for the Burmese language bits which account for 30-40% of the movie (at a guess) thereby meaning I missed out on a lot of story. I have since watched it again in complete English and was very moved by it and thought that Yeoh’s portrayal of Suu Kyi was so impressive as shown by her Burmese language skills, physical resemblance (she lost a lot of weight before taking on the role), poise, elegance and the emotion involved in many of the scenes. 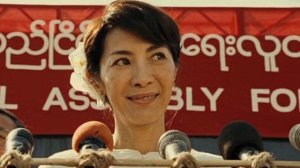 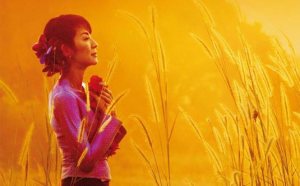 For those not in the know ‘The Lady‘ is basically a love story about how Suu Kyi and her British husband Michael (David Thewlis) sacrificed their own family happiness in the name of Burma’s democracy movement during periods of long separation and political turmoil in what was at times a dangerous hostile regime.

Furthermore, I was recently chatting to one of my students about Myanmar as her husband is currently living there and she said there would be direct flights between Tokyo and Yangon from October this year so a trip over there next year could well be a possibility though it definitely won’t include any filming locations as it was filmed in Thailand.

Click here to read my ‘Little Myanmar In Takadanobaba’ article