This years TPPO tennis tournament in Tokyo promised to be better than usual with 12 of the worlds top 13 women participating for big prize money and a large amount of ranking points. Sadly that one missing player was the one and only Serena Williams who has dominated this year with recent wins at Wimbledon, The Olympics and the US Open. Any tournament without her is slightly weakened if you ask me as she is the true number one despite what the rankings may suggest.

It was my second visit to this tournament as I previously went two years ago where I saw Caroline Wozniacki win her semi final match before she went on to win the final the following day. Sadly she was knocked out at the quarter final stage this year as was that other notable blondie Maria Sharapova and with number one Victoria Azarenka retiring from her match I was actually contemplating not bothering with the semis this year but in the end I decided to show up.

On waking this morning it was cloudy with quite strong winds and rain hanging in the air so with that in mind the roof was closed on the Ariake Colisium. As usual the 10,000 capacity stadium was fairly empty which is not too surprising given the high cost of tickets. 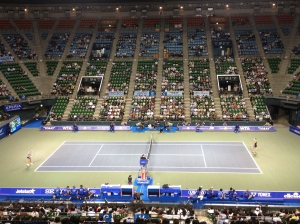 As for the action, the first match was a fairly even contest but Russia’s wily veteran Nadia Petrova overcame her Australian counterpart Samantha Stosur in straight sets 6-4, 6-4. That match lasted around two hours but the one following on from it was much shorter with Agnieszka Radwanska of Poland defeating Germany’s Angelique Kerber 6-1, 6-1. On paper this looks like an easy win for Radwanska but this match was far more entertaining for me and I thought Kerber played well producing some fine amazing shots but I guess they were too infrequent and it just goes to show how consistent the Pole was. 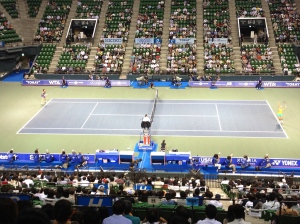 The doubles matches followed on but we didn’t hang around too long to see them both. The first set of the opening doubles semi was sufficient enough and I didn’t feel the need to watch them both just for the sake of it which I would have done in the past. Sure, doubles can have its moments and is great to participate in but watching it doesn’t hold too much interest for me.