‘Black Swan‘ won many accolades and even though its not my usual type of film I do sometimes make an effort to watch these hyped-up Hollywood award-winning films. The fact that Queen Amidala/Padme (Natalie Portman) from the Star Wars prequels was in it was another reason to see it and I was actually intrigued by the dark side (no Star Wars reference intended) of it all. Watching it was one thing but doing a location was another but as I was meeting a couple of people for lunch near the Lincoln Center for the Performing Arts I thought I might as well kill two birds with one stone. 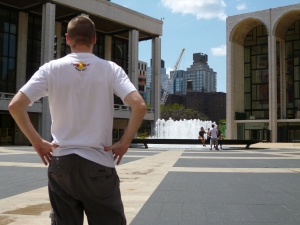