The third instalment in the ‘Mission: Impossible‘ film series takes place in Germany, Italy, The USA and of course China where scenes were filmed in Shanghai and Xitang. The latter is a beautiful sight in itself and one worthy of a visit to anyone who happens to be  in or near Shanghai.

Following his rogue actions at the Vatican, Ethan Hunt (Tom Cruise) is captured by the IMF and interrogated but fellow agent Musgrave discreetly mouths instructions for Hunt to lip-read about Shanghai where a mysterious object called the Rabbit’s Foot is located, and provides him with the means to escape. There are brief scenes of the beautiful Pudong New Area landmarks including the Oriental Pearl Tower around 83 minutes with Hunt running and jumping off the an 88-story Jinmao Tower three minutes later. Like a lot of Shanghai this area looks so much better when its neon-lit which means that my photo taken on a pretty grey and bleak looking afternoon doesn’t really do it justice. 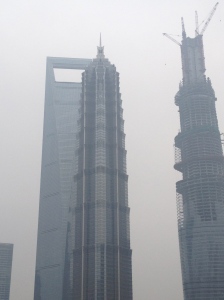 The Bund is briefly seen in all its night time glory 93 minutes in and yet again the difference in the day and night appearance of the area can be seen in the screenshot and real shot below. 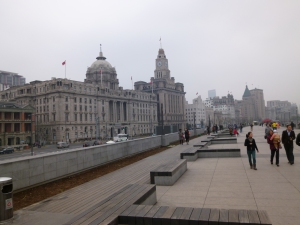 After Musgrave is revealed to be the mole having arranged for Davian to acquire the Rabbit’s Foot to sell to terrorist groups he dials his phone for Ethan to hear his fiancée Julia’s voice. Ethan bites on Musgrave’s hand and beats him up, stealing the phone in the process to track the location of that call with the help of IMF technician Benji Dunn (Simon Pegg) which happens to be in Xitang not that its name is mentioned.

This small ancient Chinese town first appears on 104 minutes and getting to this scenic town in Jiashan County, Zhejiang Province proved to be one hell of a struggle as I had no idea of how to get there. I started off at Shanghai Train Station but after a couple of enquiries there I was told to go to Shanghai South Railway Station. I headed for the long distance buses station not that I had any idea how far away Xitang really was. I was quite surprised to find out that it was only one bus journey away although the first lady on the information desk said it was two hours away and the next one wasn’t until 14.17 (which was well over an hour away). After much thought and deliberation I went back and asked a different lady who said it was 90 minutes away so I thought I’d take the risk without even knowing if I’d ever get back that evening. In the end I was delighted that it only took one hour to get there.

The next problem was knowing where the river town was and how to get to it. First I played safe and booked my ticket back to Shanghai which was at 5.28 pm meaning only two hours to do it all. I then took a cycle rickshaw paying a ridiculous 40 yuan to the driver for what was a five minute journey! Still, it was only about £4 so no real loss and it was a fun way of getting there as once he’d parked the bike he guided us through a narrow maze of alleys which ultimately led to the town.

First impressions made it all worthwhile and I was so relieved to have made it as this was one of the things I most wanted to do whilst on this trip to China. There are a few poster boards dotted around the place letting visitors know that ‘Mission: Impossible III‘ was filmed there but as they were only in Chinese I couldn’t read them. In retrospect they may have been placed at points where they filmed but I certainly can’t verify that.

The screenshots below show Hunt’s first panoramic view of Xitang from a rooftop so I obviously couldn’t replicate that. My photos beneath the screen grabs show the bridge he first runs over from a different angle. 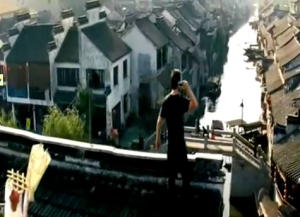 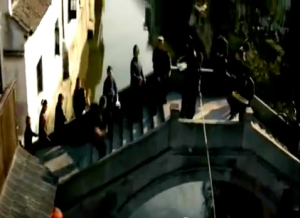 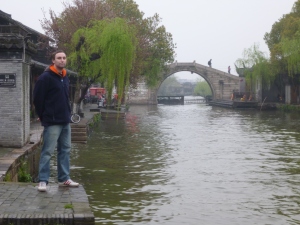 With the guidance of Benji via mobile phone, Hunt runs the length of the river before taking a short right turn where he goes past the parked boats seen from slightly different angles in the screen grab and my photo below.

Another left turn takes him up a few steps (below) passing through the white building and out the other side via steps down.

Having found Davian in Xitang, Hunt kills him, frees Julia and is electrocuted in order to deactivate an explosive for some reason or other. Of course, he is revived and as the film draws to a close on 116 minutes Xitang appears again as Hunt explains his true IMF career to Julia as they walk around. As my time was limited I sadly didn’t have as long as I would have liked to really look around and get the exact match-ups of the screenshots featured in this post. 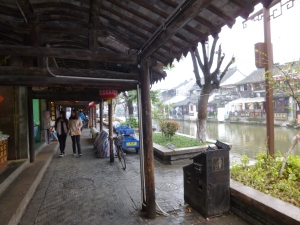 Below are a few more photos of Xitang which were not seen in ‘Mission: Impossible III‘ but are worthy of inclusion in this post as they show how, even on a wet and rainy day, that the place is still an awesome sight.

How to get to Xitang: Take a bus from Shanghai South Railway Station. It takes about one hour if traffic isn’t bad. Account for another 30-60 minutes journey time if the roads are busy. Once you exit the Xitang bus station you should see a load of cycle rickshaws like in the picture below and at the bottom of that same picture you should be able to look left and see the arch in the distance seen in the other photo below. 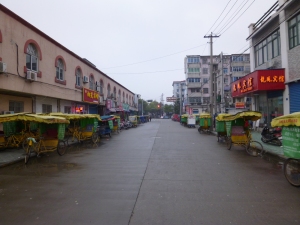 A Leicester City fan teaching English in Japan
View all posts by tokyofox →
This entry was posted in Asia Travel, Movie Locations and tagged how to get to xitang, Mission Impossible Filming Locations, mission impossible shanghai filming locations, shanghai to xitang day trip, where was mission impossible 3 filmed?, which building did tom cruise jump from in shanghai?, xitang. Bookmark the permalink.