Back in June last year I reviewed the rather poor 1958 film ‘The Barbarian & The Geisha‘ as part of the Films Set In Japan feature on this site. The main man in that film was Townsend Harris played by a fairly under-par John Wayne. It may have been Commodore Perry who first opened trade between the US and Japan in 1853 but it was Harris who became the first Consul General to the Empire of Japan three years later.

By 1859 the American government had set up in one of Tokyo’s oldest temples, Zenpuku-ji temple which is at 1-6-21 Moto Azabu and wasn’t exactly easy to find the other day with  just the address code and no map! I must have cycled round the area many times trying to locate it before taking a chance up some side street where I eventually found it. 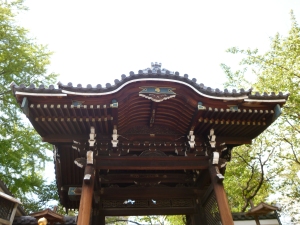 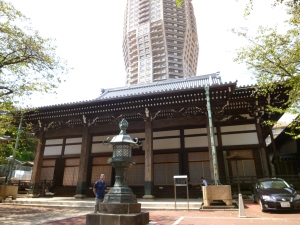 These temple grounds have a monument in the centre dedicated to Harris which was one of my reasons for visiting this place. From successful New York merchant and minor politician to the first US Consul General to Japan, Harris negotiated the Treaty of Amity and Commerce in 1858 and basically opened up Japan to foreign trade and culture in the Edo period. The America-Japan society dedicated the stone monument in 1936 on the spot where the first American legation set up.

Of course there is still a level of discrimination against foreigners in Japan but its nothing compared to the enormous hostility that Harris experienced so many of us can be thankful for his impact. He can be held responsible for Western influence in Japan’s economy and politics which can be read as a mix of good or bad things depending on your perspective! 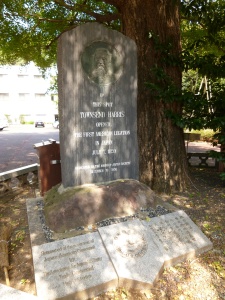 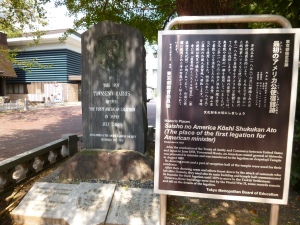 For me, it was the film that brought the name of Townsend Harris to my attention and though the primary plot is essentially true the love affair subplot is a work of fiction and perhaps one of those things where a theatrical and artistic license is used to make the story more appealing to cinema audiences.

In the movie, Harris has a romance with a geisha named Okichi but there is no evidence that this is true. Still, their story is one of folklore. Harris died in New York in 1878 and, according to legend, Okichi committed suicide in Shimoda in 1892. 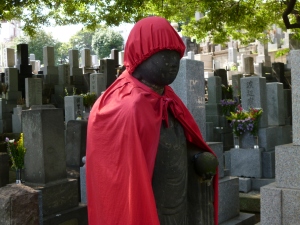 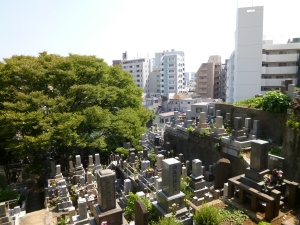 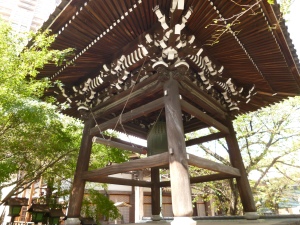 Another reason for taking in this place was to see something with an estimated age of 800+ years. The oldest ginkgo tree in Tokyo with a girth of 10m is housed within the cemetery ground lying beside the shrine. The grave of the man on the 10,000 yen note is also somewhere in this place but I didn’t bother hunting that down.

A Leicester City fan teaching English in Japan
View all posts by tokyofox →
This entry was posted in Japan Life and tagged barbarian & the geisha, geisha Okichi, john wayne, oldest ginko tree in Tokyo, townsend harris, Treaty of Amity and Commerce, Who was Townsend Harris, Zenpuku-ji Temple. Bookmark the permalink.