Japan has featured a fair few times now in Anthony Bourdain’s previous TV work (‘A Cook’s Tour‘ and ‘No Reservations‘) but this was the first time to visit here since he joined CNN. The seventh episode of the second season of this travel and food show aired this Sunday just gone with Tokyo, the penultimate episode in a series that has taken the  witty, sarcastic and profanity-using American chef/TV personality to Israel, Spain, New Mexico, Copenhagen, Sicilly and South Africa thus far.

You can watch the episode here

Much is known about the dedication, conformity and daytime life of the city’s salarymen but this show, as ever, tried to do something different and saw Bourdain going in search of the city’s dark, extreme and bizarrely fetishistic underside. It starts with quite an intense intro featuring him talking about his early experiences in Tokyo whilst sat in the New York Bar in the Park Hyatt Hotel; the very same bar which featured quite famously in ‘Lost In Translation‘ (2003). The programme then picks up pace with loads of footage in a montage thrown together in a quick moving package of highlights.

First up is the Robot Restaurant (below) in Shinjuku’s kabukicho nightlife district which first came to my attention when I saw it in Muse’s ‘Panic Station‘ video a few months back. Bourdain went to see one of the evening show’s at this place and was thoroughly impressed calling it afterwards “the greatest show in the history of entertainment.” I’ve been fairly indecisive recently about whether to cough up the 5000 yen entrance fee for this or not but after recent glowing reviews from friends…. and Bourdain I may just have to give it a go soon.

Some of the weird and perverse acts which happen in the underbelly of Shinjuku’s darkest district are described as being more about a field of dreams and fantasies rather than the act of sex. Bourdain talks to his Japanese accomplice about the host clubs where middle-aged women go to be entertained by these very feminine-looking young guys. Bourdain brings up the irony of such a thing in an area where there are many guys hoping to get laid but his sidekick tells him that people don’t like getting rejected so they pay lots of money to go to these host clubs where they’re made to feel like a princess or whatever.

Nearby is the Golden-gai district (below) of Shinjuku; a few narrow passageways possessing many shanty-style micr0-bars, clubs and eateries which I have never been to as they don’t seem to foreigner-friendly and to be honest I really don’t have any real urge to go to one just to tick that box to say I’ve done it. However, Bourdain visits a bar called Albatross to find out about such places and the code of confiding in the bartender.

Both martial arts and making sushi are two things which most people know about when it comes to Japan but perhaps they don’t know how the techniques for each are so similar. This is shown when he visits his old friend and mentor Yasuda-san (above) at Sushi bar Yasuda. The guy is an ex-karate expert who lived in New York for over a quarter of century and he said a couple of things which the average punter may be unaware of. Firstly, he said that rice is the most important part of sushi and that fresh sushi is not the be-all and end-all of fine raw fish dining. I always watch these shows on Tokyo and Japan hoping to see something new about the city I reside in and so it was nice to learn something I didn’t know about sushi.

Daitoryo is a street bar in Taito-ku where Bourdain and some other mavericks of Japanese culture (below) eat grilled fermented fish and yakitori (skewers of meat) and some motsu nabe (intestine stew with miso) and talk about bondage, fetishes and all other parts of popular Japanese fantasy culture. We find out (if you can really believe these sources!) that all men like to tie up women and also be tied up! 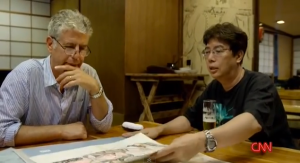 You can’t deny Bourdain has a strong affection for this country and he doesn’t judge or laugh at the way things are done in Japan such as when discussing otaku culture which is of course different from his homeland where people are taught to put away the likes of comics and figures as they get older.

‘Merging Moon‘ is the Japanese metal band (below) featured in this episode. They have self released their previous albums and have no record deal but no doubt that will change given such promotion on the might of CNN as well as the programmes Facebook page…..oh and of course Tokyo Fox!!

Since his move to CNN I sometimes feel the food part of his programmes have taken a bit of a back-step so it was quite a relief to see it still included here although it did seem to be of secondary importance most of the time. One final trip to a tiny place in Naka Meguro saw him hook up with Yasuda again to sample some shrimp, basel, octopus, quail eggs and the place’s take on okonomiyaki (above) braised with worcester sauce.

Yet again Bourdain chooses to mention Lawson convenience stores (albeit vert briefly) as indeed he did on his last show in this country; ‘No Reservations – Japan: Cook It Raw‘ which makes me wonder if he’s being paid to promote such a place!

I’ve been watching Bourdain’s shows for many years now and have always enjoyed them but I’ve always been a bit wary that the stuff he does may not actually be that unknown and I guess it probably isn’t to most locals but with the programme geared towards the millions of CNN viewers in the USA and around the world I guess it really doesn’t matter. I did think that ‘Parts Unknown’ may have not offered anything too new for me and whilst I’m far from being a Tokyo specialist I was more than happy that it delivered a few things I didn’t know too much about.