The worlds largest open-air museum, formerly known as Ancient City, houses 120 duplications, reconstructions and creative designs to educate modern people about the history of the ancient Siam with the layout of the place supposedly corresponding pretty much to the shape of the Kingdom of Thailand.

I really wasn’t too sure about visiting this place but feeling the need to get out of the city centre for the day I decided that we’d take a day trip here. I’d located it on Google Maps beforehand and could see that it couldn’t be reached by train directly but the BTS train did go as far as Bearing from where we would take a taxi the rest of the journey (30km) and just hope that it was a reasonable price! As it was, it only cost 120BHT ($3.6) although the 500BHT ($15) entrance fee took me by surprise! Thats the same price as entering Wat Phra Kaew & Grand Palace in Bangkok!!

The place was way bigger than I imagined (for I really didn’t know too much about the place prior to our visit) but free bicycles were thankfully provided and you can hire golf-carts too to get around the vast area where each of the monuments lies at its correct places geographically. Some of the buildings are scaled down whilst others are life-size replicas of existing or former sites constructed with the assistance of experts to ensure historical accuracy.

I had an ulterior motive for visiting this place of course as the ninth James Bond film ‘The Man With The Golden Gun‘ (1974) as well as ‘The Hangover Part II‘ (2011) used the place for filming but you can read more about that as each movie will get its own separate entry on Tokyo Fox very soon. My Lonely Planet guidebook also reassured me that this was an architecturally sophisticated place rather than the kind of tacky replicas seen in Las Vegas for example. I tend to think its a blend of Nihon Minka-en in Kanagawa and Tobu World Square in Tochigi. 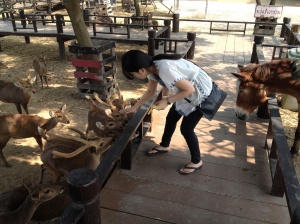 Being able to cycle around the area was quite delightful as the place was fairly empty and of course free of all the exhaust fumes that are very much part and parcel of daily life in  the centre of Bangkok. There are too many places to go into detail on any of them but overall they was a great number of wide and diverse mix of constructions. 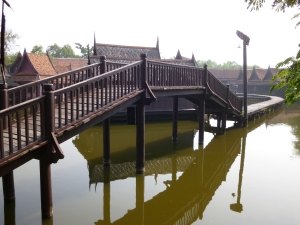 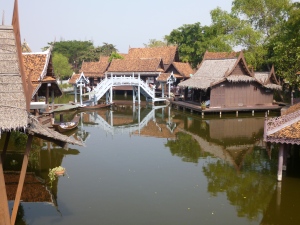 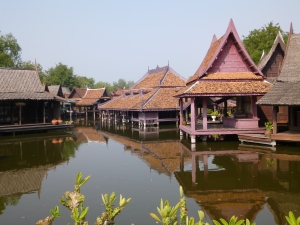 The night before I saw on Facebook that my number one Chinese friend Yayu was in Thailand too and so I mailed her to see if meeting up was possible but with us relying  only on wi-fi (usually only available in our respective hotels) to access the internet I had pretty much given up on the idea. I guess you know what’s coming next though as why else would I mention this?!! 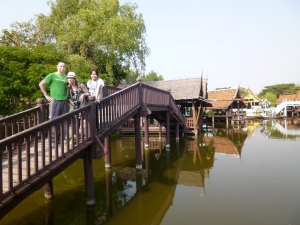 We’d just left the place where we had had lunch (very nice, cheap and Thai style with no westernised restaurants in sight!!) at Floating Market when I heard my name called after cycling past two ladies who I didn’t recognise!! I was most shocked to see her and her Filipino friend Alain given how far we had come from the centre of Bangkok and all the attractions it has to offer there! Seems we’d all been at the same New Years Eve event in Chiang Mai but of were of course unaware of each others presence which was a shame but at least we did get to meet up in Thailand. 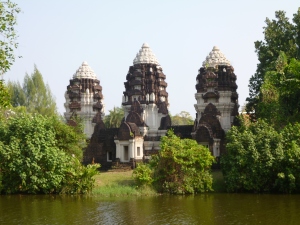 The place is a photographers paradise with so many beautiful constructions in one place but of course there’s always that doubt in the back of your mind that its just not authentic enough. 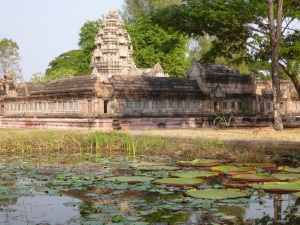 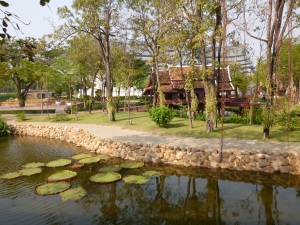 I’m quite surprised that more tourists don’t make their way down to this part of the country whilst they’re in Bangkok but I guess its never a priority and, due to the relative difficulty in reaching the place, it often gets left off one’s itinerary but I’d definitely recommend giving this place a day if you’ve done all the other major city sights.

A Leicester City fan teaching English in Japan
View all posts by tokyofox →
This entry was posted in Asia Travel, Movie Locations and tagged Ancient Siam, bangkok daytripper, day trips from bangkok, hangover 2 filming locations, how far is Ancient Siam from Bangkok?, how to get to ancient city, muang boran, train to Bearing and taxi to Ancient City. Bookmark the permalink.