Delighted to wake to news of Leicester‘s promotion back to the Premier League (after an absence of ten years) last Sunday morning, there was no better way to celebrate than making my return to the Kanamara matsuri a.k.a. the penis festival! This was the 4th time for Tokyo Fox to attend this internationally renowned festival and quite possibly the last! The event is always fun to attend with friends but the novelty is starting to wear off…which in truth it probably had on my previous visit four years ago! 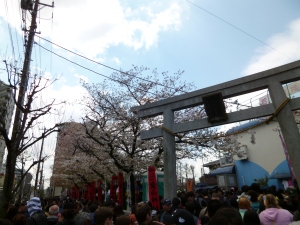 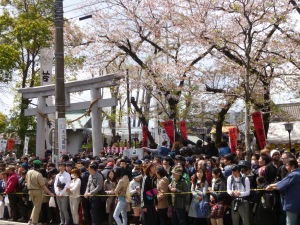 The location is only a fairly small shrine close to Kawasaki-daishi station and on the day of the festival it is always overflowing with spectators keen to see what this unique event is all about. From Shinagawa onwards the trains were just packed with Japanese and foreigners alike heading in the direction of Kawasaki in Kanagawa. Very rare to see so many ‘gaikokujin‘ in one place and perhaps we were even the majority this year! It has to be said that the police do manage to control things very well though why they don’t just close off the road outside the shrine I don’t know! Boy Scouts are even on hand to play a part in the control and organisation of the day. Now, I was in the scouts for many, many years but never ever got to help out at a p*nis festival!! 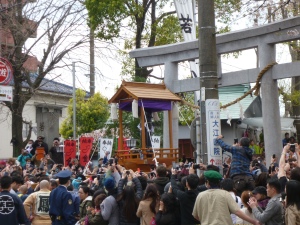 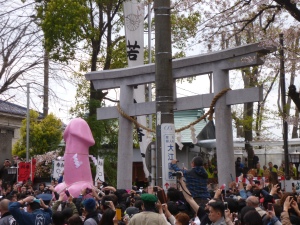 My girlfriend really must wonder about me at times as only a few months ago did I leave her behind in the hotel to go and seek out a p*nis shrine in Bangkok and then I told her I was going to this festival two days ago! This time I concentrated more on the parade which I watched (in part) with my friend Finlay and his mates from across the road. In fact the streets were lined with people waiting in the wrong places and it seemed only I knew which course the procession would take. All in all the parade features three very heavy phallic shaped omikuji (portable shrines) which need about 14 people to carry them. I sadly missed last years when Karl Pilkington was in town to record a segment of ‘The Moaning Of Life‘ which aired on Sky One last year. In that he helped out with the lifting of the giant c*cks! 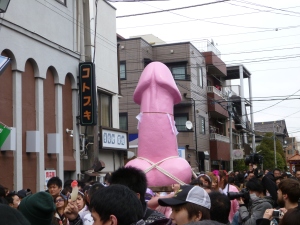 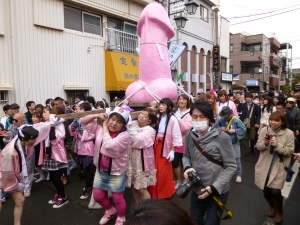 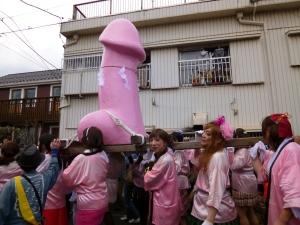 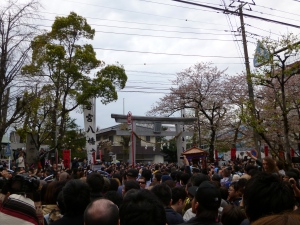 Not long after the parade started, the heavens opened up. Thankfully the showers didn’t last too long and the sun did come out again but it was far more windy and the ground, which was already muddy and wet in many places, became even worse. Still, its always fun to watch a few silly overdressed Japanese girls trying to navigate their way round the shrines grounds in their high heels! 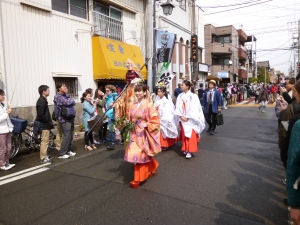 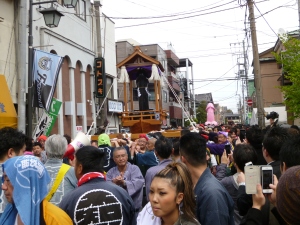 For those still wondering what this event is all about its basically a prosperity and fertility festival which also raises awareness and funds for AIDS prevention and research….which is what I’m all about and is my main reason for attending!! As well as the aforementioned procession of omikoshi (portable shrines) there is live music, transvestites, cherry blossom trees, penis lollies (as well as ones of the ladies front bottom too!), snack foods and most importantly….alcohol!!

Back home in the UK, the local daily newspaper; the Leicester Mercury (well its twitter feed!) got wind of my tweet about celebrating the foxes achieving promotion at this weird event and before retweeting it they set it up by saying to “stand by for a mystifying retweet!” The campaign to get a similar event in Leicester in the future starts here!!

You can read my previous articles on this quirky ‘only in Japan’ festival, as well as see some much more interesting and better photos, by clicking on the links below…