If you’d asked me five years ago about Singapore I would no doubt have told you I had no interest in visiting such a boring, sterile place overly officiated with rules! However, time moves on and opinions can change. Anthony Bourdain’s food based TV shows, in particular, taught me that maybe my pre-conceptions about Singapore were wrong and wide of the mark and as I got more into sampling international cuisine this place appealed more and more.

The need to use up some of my holidays and the fact that my eldest sister and her family live on an Indonesian island just off the coast of Singapore meant that visiting this city-state-island-country became a reality. No sooner had I arrived on a night flight via Kuala Lumpar and I was off in a taxi to Changi Village Hawker Centre to have nasi lemak for breakfast from the very same stall that Bourdain visited in the inaugural episode of ‘The Layover‘ (watch it here) on the Travel Channel back in 2011. 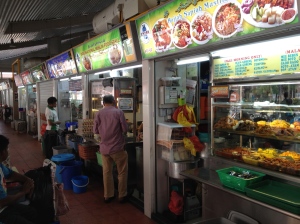 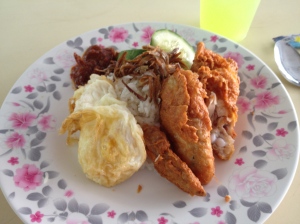 After that I walked round the coastal boardwalk which I had hoped would take me to  Changi Beach, site of the Sook Ching Massacres. Sadly though it didn’t extend all the way round to that historical sight where 66 Chinese males were shot by the Japanese military police on 20 February 1942. Not a place with a pleasant history but one that I was interested in seeing having recently read ‘The Railway Man‘ by Eric Lomax which included some dark tales of what prisoners went through in WWII. 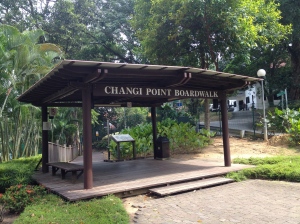 Continuing the dark theme, the Changi Museum was my next destination and, along with the village food centre, was the main reason I decided to start my trip in the area surrounding the airport. This museum is free (although you are quite heavily encouraged to purchase an audio set for $8) and features some compelling letters, drawings, photographs and personal artefacts that chronicle what the POW’s suffered during the Japanese occupation in 1942. 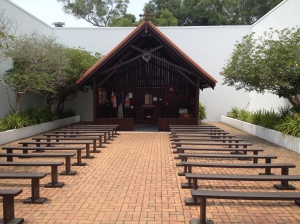 I took yet another taxi from there to Expo MRT, the nearest station, where I wanted to see the giant sandcrawler-shaped building belonging to Lucasfilm Ltd. Sadly though I couldn’t find it or a sign saying that it even existed in this area. Eventually I gave up and continued back towards the city centre via train. One final stop though and that was at Paya Lebar MRT where I hit another food court in the Geylang area. I wanted to try claypot rice and still hungry for more after that I also purchased some Wanton noodles. Both dishes were fantastic and the beauty of these hawker centres is that you can sample two or even three of them as the prices are very reasonable.

Next, up was Kranji but I failed to find what I was looking for. It’s war cemetery contains the graves of thousands of Allied troops but without any great maps and signs pointing me in the right direction I yet again had to leave a place empty handed. By this time it was late afternoon and I decided it was time to head to Chinatown where I was booked into Hotel Lulu; a rather cheap run-down hotel where I had a tiny room. The most basic of places but it did its job of providing me with a place to shower and lie down at the end of a long, long day. 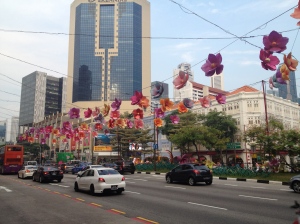 It wasn’t over yet though as I headed out fairly instantly. Outram Road featured heavily throughout the aforementioned Lomax book as its gaol was the place from hell where he suffered the most. That prison war camp has long been demolished so I was just left with a road sign to remind me of what I had read. 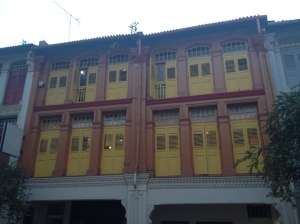 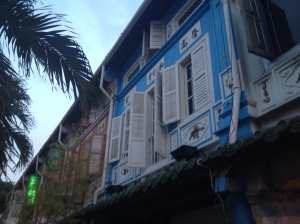 It was nice to see some nice buildings as I walked on to get some dinner at my third and final food centre of the day. Maxwell Road Food Centre possesses more than 100 food stalls and going here made me realise I had kind of wasted my time with the other hawker centre’s as this place had it all. The place I intended to visit was closed but as there was a sizeable queue at a nearby place I though that must be good. That’s how it seems to work anyway in these places. I had Lor Mee which is basically a thick starchy gravy with thick flat yellow noodles and this was the quite possibly the best dish I ate in Singapore. 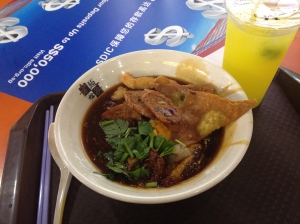