As a lover of the wireless, the highlight of my trip into Leicester earlier this year came when I popped into the BBC Radio Leicester studios which are located at 9 St Nicholas Place adjacent to the medieval Guildhall and Leicester Cathedral as featured in my ‘Sightseeing In Leicester‘ post last month. Following a text conversation with the station’s football commentator Ian Stringer around the New Years period I was invited to see the studios as he knew I was a bit of a radio geek. 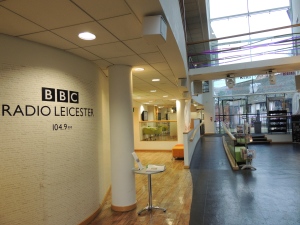 Naturally I jumped at the chance as it would fit in well with the other stuff I had to do in the city and so I agreed to meet him at 3pm for a studio tour of the station which my parents are avid listeners of. Ian was in Tokyo last February to run the marathon and we hung out a fair bit during his time in the capital and he kindly let me interview him for the inaugural Tokyo FoxCast podcast. (The second podcast is still in the pipeline!!) 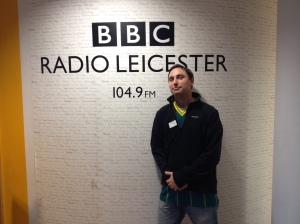 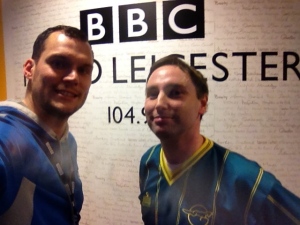 Right on the dot he appeared and greeted me (the only person who calls me Tokyo Fox in person!) and took me on a 30 minute tour starting of course with the main two studios which are used for the daily output on the station. I got to sit in the main hotseat at the control desk and where the guests sit whilst he showed me what some of the knobs, buttons and faders do. Very exciting stuff for me! 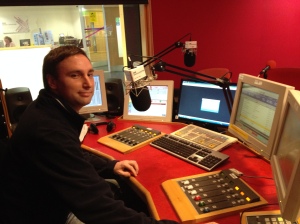 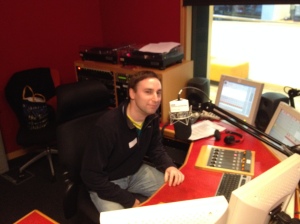 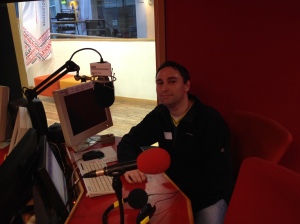 Other things which I got to see included the outdoor broadcast vehicles, the newsroom, the record library, the unused studios vacated by the Asian Network (which used to share the building) and the staff office where I met Jason Bourne (no, not that one!) and Political reporter Tim Parker who I spoke to for quite a while as he previously lived and worked in Japan. I even tried on his BBC jacket which probably saw me reach optimum level of nerdiness!

What seemed to be very apparent from my time at the studios is the protocol and procedure to follow if (when?!) the Queen eventually departs this world. There are notices everywhere stating what should and shouldn’t be done in the case of that happening.

Ian had to do the preparation needed for that evenings Football Forum show so there wasn’t too much time to hang out but as I was leaving I asked about meeting ex- Leicester City captain Matt Elliott, who is the regular expert guest on the show, and he said that if I came back later he’d let me in to meet the former foxes legend.

(You can read more about when I met Matt Elliott here) 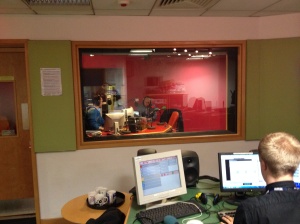 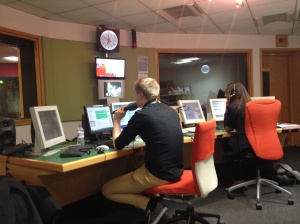 Having killed two hours in the City centre I headed back to the reception area where I waited patiently whilst watching legendary Radio Leicester presenter Ben Jackson present the teatime show through the window when one of my City heroes arrived. I had a quick word with Ben when he came off air and, like everyone else at the station, he was very friendly and nice to speak to. 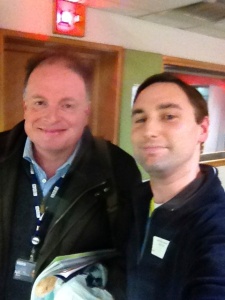 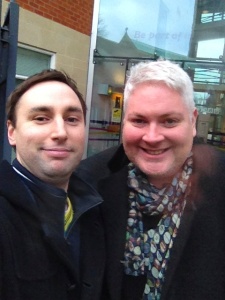 Earlier in the day I had bumped into Jonathan Lampon (who was the presenter on the breakfast show back then that played out the interview Ian did with me at Meiji Shrine) by chance. I arrived a bit early so was just smartening myself up in the window of an empty shop a few doors along when I saw him appear in my reflection. I ran after him and introduced myself as we had never ever met despite the odd bit of communication here and there on Twitter. I thanked him for reading out a fair few of my tweets last year as well as the dedication he kindly read out on our wedding day back in July.

I wasn’t actually expecting to hang around for the the Monday night Football Forum (which airs between 6-7pm) but Ian said it was fine to do so and so I watched the whole show through the glass in the bit where Jason and fellow Broadcast Journalist Namrata (who also works on the programme from time to time) sit. This was a little bit surreal at times but I really liked it and was really pumped for it from the moment I heard the Kasabian theme tune (‘Eez-eh‘) kick the show off at 6:05pm. The content of the show included post-analysis of the FA Cup win over Newcastle, a few callers and some interviews with experts about potential new signings in the transfer window.

Jason was very kind to me and showed me stuff like the running order, script and the incoming tweets and texts on his computer. I was actually expecting a few more people like producers and broadcast assistants to be around but there was only five of us in the whole building whilst it was on air.

I had a quick word with the guys once the show went off air at 7pm, got some photos with them and left the place shortly after that and was buzzing as I made my way back to the station and headed home.