Whilst back in England recently I watched this rom-com with Gwyneth Paltrow. Well, obviously not with her but I did view this 92 minute film and recognised many of the locations from the nations capital so when I travelled down to London a few days later I set about finding some of them.

The alternate parallel universe premise has been seen in TV and film many times such as in the fantastic 1988 German movie ‘Lola Rennt‘ (a.k.a. ‘Run Lola Run‘). As for ‘Sliding Doors‘, the scenes run side by side in this imaginative British-American rom-com drama which is based on the paths taken in life by Helen (Paltrow) determined by whether or not she catches her intended train which causes different outcomes in her life. The shooting locations are as follows:

* 62 Princes Square in Notting Hill is Helen’s house which she shares with two-timing Gerry (John Lynch). 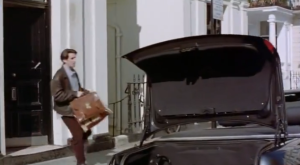 * 25 Primrose Gardens is where Helen’s friend Anna (Zara Turner) lives and in one of the parallel narratives she goes to stay with her after catching Gerry in bed with his ex-girlfriend. 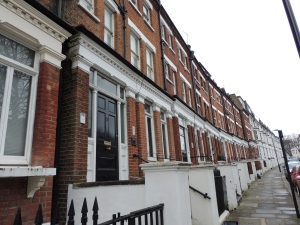 * Pattern House at 223-227 St John Street is the loft apartment where Lydia (Jeanne Tripplehorn) lives and is where she tricks both Helen and Gerry into coming (separately) to find out about the latter’s affair with her. Distraught by the deception Helen runs off and subsequently falls down the staircase whilst fleeing from Gerry.

* Bertorelli’s at 19-23 Charlotte Street is the restaurant where Helen works to support Gerry in one timeline and drinks with new love interest James (John Hannah) in the other.

* 6-8 All Saints Road in Notting Hill is the new restaurant of Clive which Helen organises the grand opening party for. 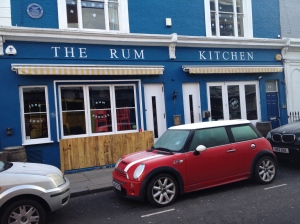 * The Blue Anchor on 13 Lower Mall in Chiswick, close to Hammersmith Station, is where James gets Helen fully involved in some post-rowing crazy dance celebrations.

* Fatboy’s Diner – The scene for Helen’s date with James after her disastrous break-up. This classic 1950s-style chrome-and-neon diner with counter stools is located out on a limb a bit as it’s across the river from The 02 Arena. The address is 64 Orchard Place, Poplar and it’s a 12 minute walk from East India Station on the DLR Line. 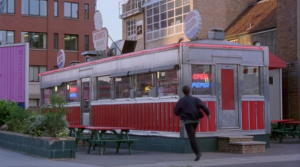 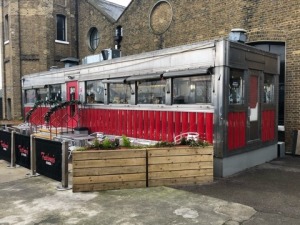 * Chelsea and Westminster Hospital on Fulham Road is where Helen ends up in both timelines and loses her baby with two different outcomes following in the wake of that devastating news. In one of the timelines she sees brief visions of her alternative life.