Over the years Seoul has lived very much in the shadows of neighbouring places like Tokyo and Hong Kong when it comes to Asian locations being featured in western movie productions. This time though, Marvel Studios agreed to portray South Korea as a high-tech, modern country during its 15 minutes of air-time. Mind you, it did cost the Korean Ministry of Culture, Sports and Tourism nearly £2.5m for it to be shot there on the condition that it showed the city in a positive light.

Whilst much of ‘The Avengers‘ (2012) was filmed in Cleveland in Ohio, ‘Avengers: Age Of Ultron‘ (2015) was shot all over the place with locations including England, South Africa, Italy, Bangladesh, the USA and of course South Korea.

Filming in the capital city took place between March 30 and April 14 last year at various locations in Seoul. Now, I hadn’t even seen the first Avengers movie, let alone the latest instalment when I was in town a few weeks ago (I have seen both movies since returning to Tokyo) but thankfully Ethan had, and was able to guide us around a couple of the filming locations.

Leaving our wives back at base, we went cycling along the Han River for about an hour each morning. First up we cycled across Banpo Bridge to the futuristic looking man-made islands around Banpo Hangang Park that supposedly brighten the vista of the river at night. The facility on the largest of the three artificial islands is known as Saebit Dungdungseom (below) which was built in 2011. It first appears around 79 minutes and serves as the I.T. institute of Dr. Helen Cho (Claudia Kim); a friend of the team who is forced by super villain Ultron to use her synthetic-tissue technology as well as vibranium and the scepter’s gem, to perfect a new body for him. 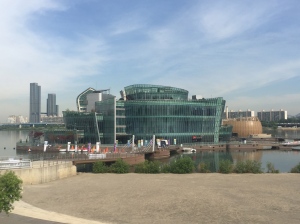 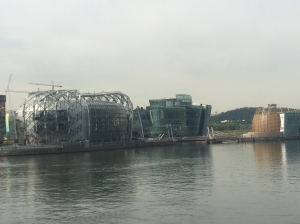 The following morning, Ethan and I cycled west to Mapo Bridge (below) which crosses the Han River and connects the Mapo and Yeongdeunpo districts. During filming it was closed (at great cost) for approximately 12 hours so that they could film an action scene involving Captain America in pursuit of the cradle being whisked away by truck. 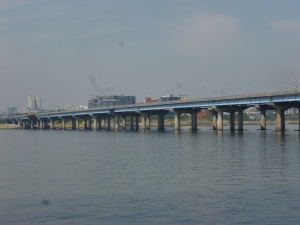 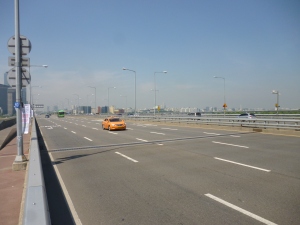 The Seoul set-pieces have been cleverly edited together and tend to blend into one  but other areas include the Gangnam Subway Station intersection, Cheongdam Grand Bridge, and Star Park in Digital Media City in Sangam-dong.

Avengers stuff is everywhere in Seoul and the city seems very proud to have (finally) had a movie feature it. The War Memorial Of Korea museum, which we visited on our first day, had a special Avengers interactive exhibition allowing visitors to explore inside a full-size replica of Marvel’s Avengers S.T.A.T.I.O.N. (Scientific Training and Tactical Intelligence Operative Network) including film props, interactive components, Hulk’s laboratory, Iron Man’s research institute, Thor’s Space Tower, Marvel Merchandise and so on. Entrance is 25,000 won (approx. $25) so we gave it a miss but not before taking the cheesy photos below! 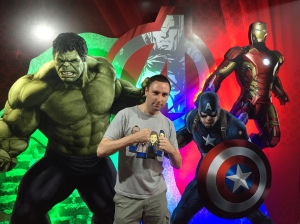 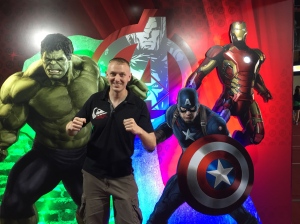 ‘Avengers: Age Of Ultron‘ is released in Japan on July 4th (…if you’re ever looking for the release dates in Japan then my tip is to just scroll right to the bottom of the list on IMDb or whatever!)

4 Responses to Avengers Age Of Ultron Filming Locations In Seoul