With over 35 million people crammed into Tokyo Metropolis, space is at a premium and so huge apartment blocks dominate the skyline. Though Japanese people have a strong affection for animals the downside of living in such dense areas is that many landlords do not allow their residents to keep pets of any kind. Furthermore, keeping a pet in a high-rise building without a garden is not such a good idea and needs the owner to take it out more often than in many other countries.

In order to get their animal-fix the people subsequently have to make do with alternative ideas such as dog cafes, cat cafes, rabbit cafes, owl cafes, dog spa’s, petting zoo’s, dog rentals and islands solely devoted to one animal such as Rabbit Island in Hiroshima-ken. 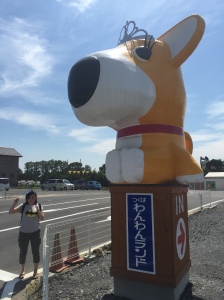 Ever since she found out about Wan Wan Land (Dog’s Land) last year, my wife has wanted to visit this place and so last Sunday morning we travelled over to Ibaraki prefecture to take a two-day break from Tokyo. It was an absolutely sweltering day with temperatures around 34 degrees celsius as we arrived at the entrance gate and paid 1500 yen for the two of us (rather than each) as we had picked up a 50% discount coupon in the tourist information centre at Tsukuba Station.

Everyone is aware that most nationalities have their own language but far less know that animals make different sounds according to each country. I had no idea of this and had never really given it a thought before I came to Japan and soon discovered, for example, that dogs don’t say woof here but instead bark wan wan. On entering the park there were display boards showing these differences (although the British one was wrong!) as well as one displaying the various gestures and body language which man’s best friend makes. 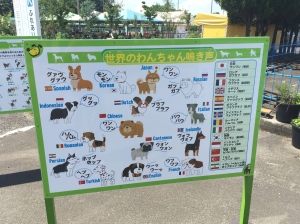 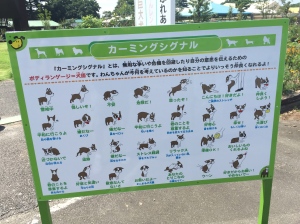 This dog amusement park has different sections such as Wan Wan World (a stage where dogs do some kind of performances – we never went here though), a dog run and some other areas which I will mention later. 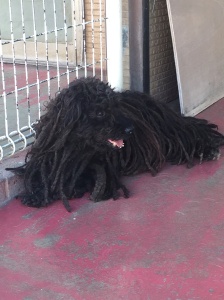 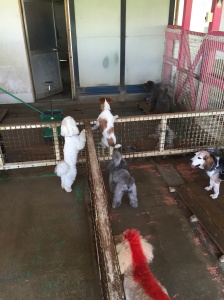 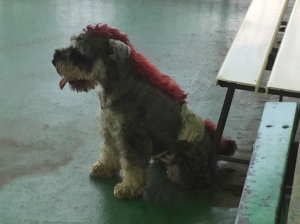 Rina was feeling a little sad about the conditions that the poor dogs were in so we decided to cough up 1000 yen (20-25 minutes) and took a dog called Ponni out to give it a break from its enclosed environment in the cage. It wasn’t too long before it took a dump which got me thinking that I’d basically paid money to pick up it’s poo! 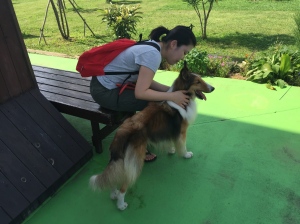 After that we took one of its cage-mates for a 25 minute walk. This one was a Siberian husky called Hasumi and though the idea is good for people who are unable to keep a pet it is a bit strange and she (as well as Ponni) really didn’t seem to know where they were and what was going on. The whole thing generally made me more sad than happy.

At some stage during our visit there was a goalkeeping dog show where the kids had the chance to try and beat the dog whose agility and reactions were naturally very quick. It seemed the only way to beat it (other than striking the ball really, really hard) was to chip it up and over the poor dog on a restricted leash. 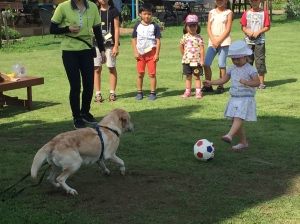 An area called Wan Wan Park is a pen separated into two sections; one for the big dogs and one for the smaller dogs. Visitors are invited here to touch and play with the dogs and was a noisy area with so many of the dogs barking constantly no doubt confused by an ever-changing cast of admirers trying to stroke the animals and take photos. It should be noted that these sections are only open at certain times to give the dogs a rest. 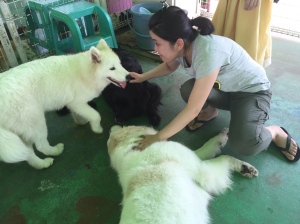 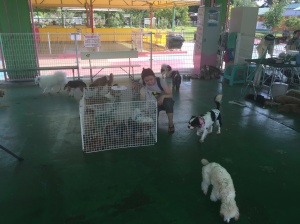 It may be called Wan Wan Land but there is also a small building devoted to  the other most common family pet; cats. If I hadn’t been in Japan for so long I think I’d probably consider such a place very weird but these days I don’t really think too much when all these uniquely Japanese places pop up. 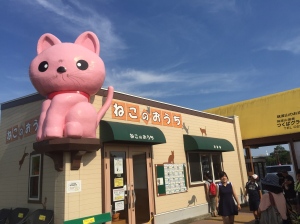 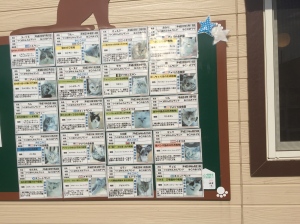 The park closed at 4pm and we left the place slightly less than satisfied and a little sad as it just didn’t seem right for such animals to be kept in such conditions. Of course we don’t know the full story and why they are kept in this vicinity rather than being with just one family.

During the walk to and from Wan Wan Land we could see the beauty of Mount Tsukuba in all its glory and most impressive it was. We would ascend this mountain the following day which you can read about here.

How to get there: If coming from Tokyo then take the Tsukuba Express line from Akihabara station which takes just 45 minutes. Outside Tsukuba station is the bus station and a 20 minute bus ride from stop #3 will take you to Tsukubasan-Guchi bus stop (passing Wan Wan Land on the way) and then it’s a 15 minute walk from there. Head back towards the giant torii gates, turn left and go past the Save On convenience store (on your right), keep going until you hit the main road, turn left and go past the closed unagi (eel) restaurant (below) and Wan Wan Land is on the right after a few minutes walk. Or just take a taxi!!

Having refreshed back at our hotel for a bit we then went out for dinner and had shabu-shabu which is basically thinly sliced beef and vegetables boiled in water and served with dipping sauces. This isn’t a particular speciality of the area but we were tired and didn’t want to venture too far from our lodgings. The deal was very good value and it was nice to enjoy a dish that I probably haven’t had for about a decade.