My main reason for going over to Kampot was to visit the Bokor Hill Station area and my original plan was to take a $12 tour bus to see it all. However, the night before the very nice hotel manager at The Columns introduced me to a retired American guy called Benji (now living in Thailand) and we agreed to take a taxi together to allow for more time and freedom at some of the sights.

Bokor Hill National Park is about 45 minutes drive from Kampot and accessed by a road which is perhaps the best road in Cambodia in terms of its condition and state. Domnak Sla Kmao was the first point of interest and set a prescedent for what was to come. I love to be able to roam around abandoned buildings which offer glimpses of yesteryear and this former royal residence was a good appetiser for what was to come. 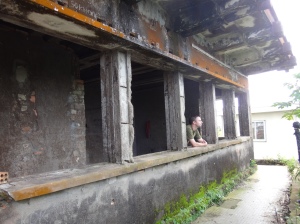 About 100 metres down the path was the former fruit shop; another abandoned place with a couple of other building ruins nearby featuring some beautiful bright features  within the derelict walls. 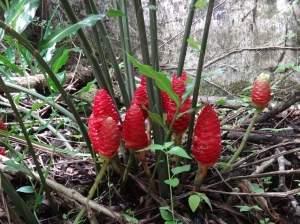 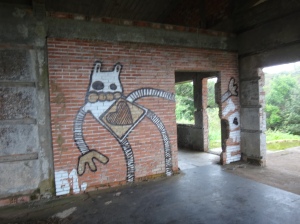 The giant holy statue of Lok Yeay Mao Monument stands tall and overlooks the area. Many locals give offerings of flowers and food and pray to Lok Yeay Mao in return for a safe journey onwards or homewards. 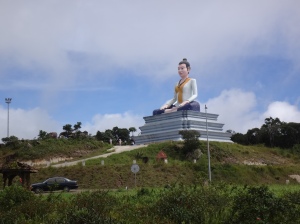 After a bright sunny morning the place was completely covered in mist when we arrived at our main destination; Le Bokor Palace a.k.a. the Old Casino Hotel, not that we could even see where it was. However, once the mist descended it began to appear, giving it a perfectly eerie feeling like how it was portrayed in films like ‘City Of Ghosts‘ (2002) and ‘R-Point‘ (2004). Click here to see the location match-ups from those movies. 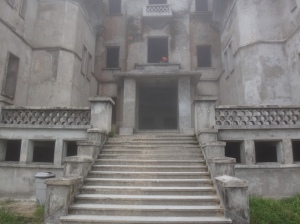 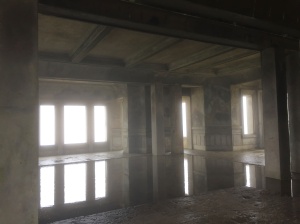 The construction of this French colonial settlement began in 1917 and took eight years to complete. The French chose the location for the slightly cooler climate as it is located 1,080m above sea level atop a lush green forested mountain. 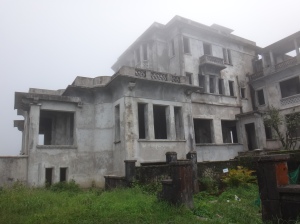 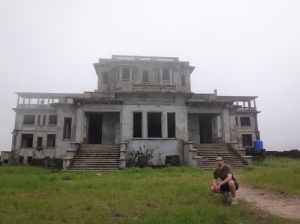 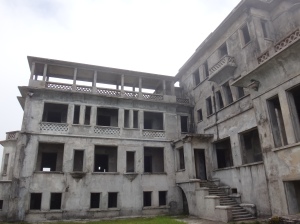 It was built as a resort for the French social elites living in Cambodia who needed to escape from the humidity and heat elsewhere. This was in a time before air-conditioning of course and the breezes and mountain air kept the hotel cool. The long road up the hill and the palace compound itself was built with slave labour and 900 lives were sadly lost during construction. 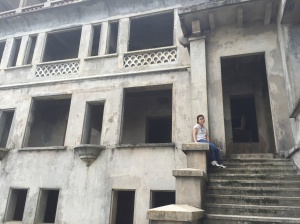 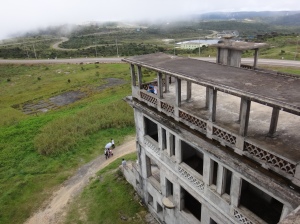 The Palace has experienced a lot over the years ranging from French dignitaries having lavish ballroom dances to the ruling Cambodian elite in the 60’s and in the late 70’s it was occupied by the Khmer Rouge and used as a prison. This place was in fact one of their last strongholds in the country before the Vietnamese invaded, when this area became a battlefield between the two forces. 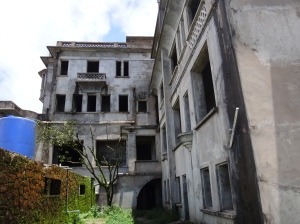 The Bokor Palace Hotel had 38 bedrooms and was the centrepiece of the hill station consisting of a post office, Catholic church, royal apartments and shops dotted around the settlement. 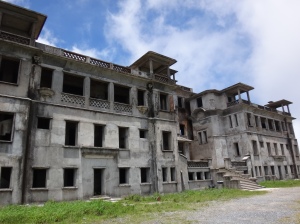 To be able to freely wander inside and outside of the whole place is something I love about being away from all the enforced rules of Japan (and the UK for that matter!). There were many puddles inside and the place was a bit of a maze at times as we searched for the right steps that would take us all the way to the top where the views were fabulous.

A few hundred metres down the road is the aforementioned Catholic church. In the late 1970’s Vietnamese forces were entrenched here and firing at the Khmer Rouge, who were holed up in the old hotel. The multiple views from the hill behind it were superb with a coastline 100 metres below on one side, Bokor Palace on the hill in the distance and looking down on the abandoned church itself. 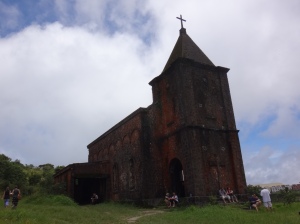 Next up was Wat Samprov Pram; a temple perched right on the edge of the cliff with a huge drop down to the sea beneath. This was a quiet place with hardly anyone else around other than a couple of monks studying amidst some plastic animals under an interesting rock formation. 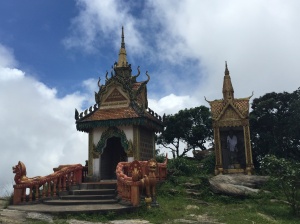 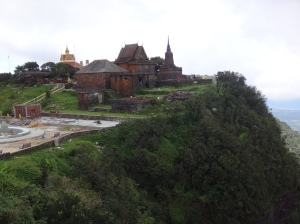 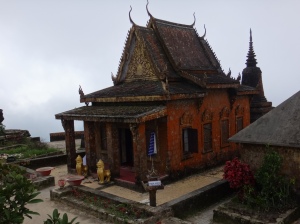 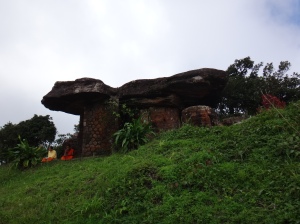 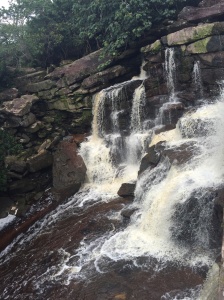 A brief stop at the slightly polluted waterfalls (above) and we were back in Kampot mid-afternoon to enjoy the rest of the day in the river town before we took another taxi back to Phnom Penh the next morning.