When a colleague told me recently that he was going to this place I was happy to respond and say that I had actually been there. What I didn’t realise was that it’s actually located in Fukushima prefecture which seems so far away now but back in 2004, and living in Chiba, it was just a ride away on the Joban Line.

I thought the first time I went to Fukushima was in June 2012 when we went hiking in Goshikinuma and Jyododaira but now it seems that my history has been rewritten!

This flashback story begins the night before the journey though. I remember doing my washing after work that night but the very windy conditions turned to heavy rain and typhoon weather and I just couldn’t sleep for all the noise outside. I even tried to sleep on the sofa but only managed to get about an hours sleep before I got up at 5:30 am to meet Ethan and Luke at Kita Kogane station.

Our journey in 2004 on the last day of August to Iwaki along the Joban Line should’ve been a fairly straight-forward ride but weather conditions put paid to that and it ended up taking us 5.5 hours to reach our destination. 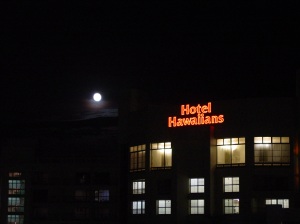 We still got to spend about eight hours there with our main interest being the water slides and the hot baths although looking at the official website now it seems like we didn’t really get full use of all the places facilities. The most memorable slide for me was the 100 metre-long Stream of Wonders which involved us descending the artificial river rapids on flotation rings. There were two choices of ring; the solo ones or the double variation resembling a giant number eight figure. The latter was ridden in pairs from a variety of different heights though sadly the staff deemed Luke to be too big to ride on the front of the two man rubber rings.

These were very much different times in Japan and we were in a prefecture which was not used to seeing foreigners at all. Luke is just tall but not really heavy but to the Japanese attendants working that day he must have seemed like a giant.

I do remember that a group of young girls with disposable camera’s (this was a pre-smart phone era!) actually wanted to have their picture taken with us which before coming to Japan was something I heard could happen in this country but never really believed it. Naturally, we lapped up the attention and happily posed with them! 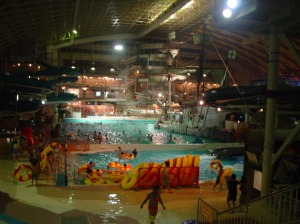 Other slides include Wonder Black and Friendship Canyon. The former involved a thrilling ride for 130 metres through a dark tube at fast speeds (up to 40km per hour if their website is to be believed!) and the latter consisted of your more conventional  twisting waterslides that carry riders a total of 120 meters.

In the wake of the Great East Japan Earthquake the theme park was forced to suspend operation and didn’t resume full operation until early 2012. 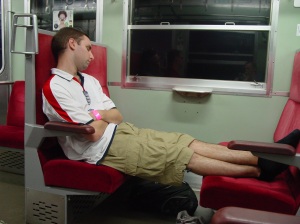 It had been a long, long day and on the way home I did something that annoys me when I see it now. As you can see in the picture (above) I put my feet up on the seat in front on what I can only assume must’ve meant there were no other passengers on the train. Looking back at the old pictures included here (all courtesy of Ethan) it seems like the train was empty.

How to get there: Take the Joban Line from Ueno or Nippori (3670 yen) and then get a taxi from there.