On Saturday night I was honestly in tears as a late winner provided a fantastic climax to a Japanese sporting event. That’s enough about the Cherry Blossoms last gasp victory against South Africa in the Rugby World Cup in England though! Instead, I am talking about matchday 11 of the J-League game I was at over in the city of Yokohama!

With five different J-League grounds under my belt this season I thought I would try and add a few more before the end of the J-League seasons in November. Although I’ve been on a tour of the stadium which hosted the 2002 World Cup final, I’ve never seen an actual game there so I decided to pop along to see home team Yokohama F. Marinos in action.

Beforehand there was some debate in one of my lessons as to what the “F” in the team name stands for. My ten year old student reckoned it must be for “Football” but I joked that it was for “Fishermen” as Yokohama is a Port city. She believed it! It actually stands for Flügels following the merge of Yokohama Flügels and Yokohama Marinos in 1999. Personally, that “F” is just crying out for some wisecrack like myself to insert the f-word into the gap and (outside of lessons) that’s what I usually do!

The Marinos captain Shunsuke Nakamura is perhaps the most celebrated player to have graced the shores of Great Britain following a very successful stint up in Scotland with Celtic between 2005-2009. The 2006-2007 season was undoubtedly his most memorable season as his free-kick beat Manchester United (Watch it here)  in the Champions League, another free-kick (in injury time) against Kilmarnock clinched the title (Watch it here) and then he won the Player of the Season award. 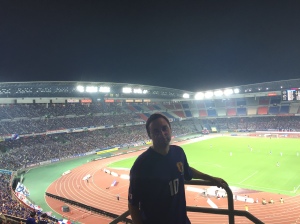 Following a disappointing spell in Spain with Espanol, he returned to play for Yokohama F. Marinos with backers Nissan paying his wages. His appearances this season have been limited but he was thankfully playing in this game where FC Tokyo were the visitors. Of course, it wasn’t just about him though but in a game limited on action and highlights, he did provide a moment of inspiration right at the end as his superb pinpoint cross was decisively headed home. 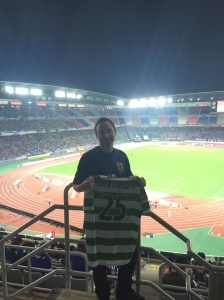 The 88th minute has been an unlucky one for my Kashiwa Reysol boys the last few times I’ve seen them and unbelievably it happened yet again as debut boy Cayman Togashi’s headed winner at the near post just a couple of minutes from the end settled this closely fought bout against a resolute FC Tokyo.

Lateness was indeed the order of the day and I’m not just talking about on the field activity. I got out of work very swiftly but, with a few connections to make, I was still racing against time to make the 7pm kick off. A bad start though as my first train was delayed and then I missed my next connection. I was getting very frustrated with everything but all-in-all, I probably did quite well to get from Gotanda to Shin-Yokohama by 7pm but then I needed to get to the stadium which was 15-20 minutes away on foot and where my school manager Shinobu was waiting with our tickets.

Finding the Nissan Stadium was one thing but locating the right exit was another! The game was well under way by the time we entered and then their was the nightmare scenario of trying to find a couple of free seats. We finally found some high up in the stadium with about 25 minutes already on the clock.

It really was a poor game and when it was settled right at the death there wasn’t much time left for FC Tokyo to get an unlikely reply. A sea of umbrellas followed at the final whistle which was quite a spectacle and one that I’ve never seen in over three decades of watching live football. 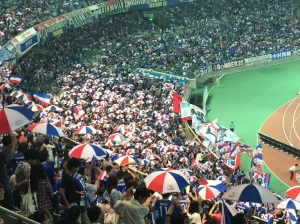