Itabashi-ku has been the home of the all-new Tokyo Fox Global Operations Centre since the start of October and so far it’s all been mostly good and our old place in Shinjuku-ku already seems such a long, long time ago! Of course it’s still early days but so far we are enjoying sunshine coming into the apartment each morning as well as a bit of wind going through it when we open the windows and doors. Neither really happened in our old place and sadly the walls became a bit mouldy but the new place is located in the corner of an apartment block facing the all-important south-west direction with two sizeable balconies. 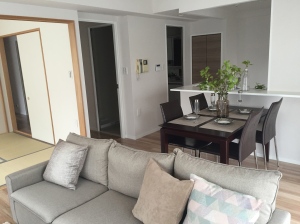 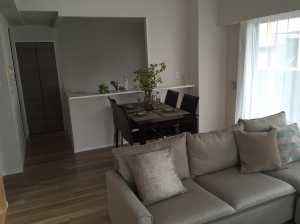 This place is quite unique in that it actually included some furniture with it in the living room such as the TV unit, coffee table, dinner table and chairs, plants, rug, some kitchen utensils and best of all, a three-seat sofa. Being able to chill-out on such a comfortable sofa has been something I have been unable to do for many, many years now.

I’ve never really been a bath-person but it has been nice to soak in a decent sized one like we now have. Showering whilst sitting down is a new thing for me but that was the order from “the management” (a.k.a. my wife!) and one that I’m very used to now. Naturally, there are a couple of minor negatives (and they really are very little things like the toilet seat being a bit small!) as no place is ever really perfect but the benefits naturally far outweigh the costs. At first, I thought we were staying in a hotel or something as I couldn’t believe that the place we were sitting in was our own home and one that we actually owned! 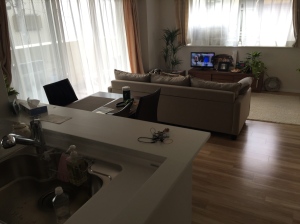 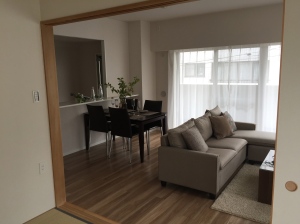 One of the major pluses is that the new place is so quiet at night whereas in the previous place we were on the ground floor with forklift trucks going by throughout the night and van doors being noisily slammed shut every few minutes each morning.

Of course, our previous place was more convenient for most things, particularly travel where most places were within reasonable commuting distance. Now I face a distance that takes twice as long to complete by bicycle but so far I’m enjoying the extra exercise and saving train fare money. It’s also quite nice to cycle past some old haunts such as the Afghanistan restaurant in Higashi-Nakano, the ‘Lost In Translation‘ temple in Nakano Sakaue and I get to finish the journey by cycling over the overly populated Scramble Crossing in Shibuya.

My mother-in-law and Momiji the dog came to stay with us for pretty much the first ten days or so of living there which was nice but also meant a slight delay in unpacking all the boxes and getting the place exactly how we want it but as ever with these things it’s a work in progress. 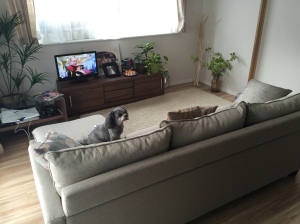 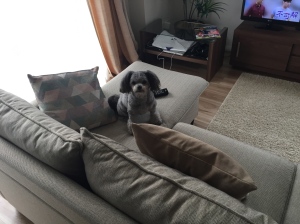 Two months on and we’re still uttering that phrase as very little has changed and we’re still wondering what to do with the spare bedroom. I guess that might be filled one day but before anyone jumps to certain conclusions I can confirm that we haven’t moved into this bigger place because my wife is pregnant!