The good thing about spending so long in Hiroshima on our latest visit was that there was plenty of time to do things at a leisurely pace whilst fitting them in with the more traditional New Years customs. We had intended to go to the naval port city of Kure after visiting Gensoboji temple on our third day in Hiroshima but as it took much longer than expected to locate that place we decided to postpone it till a later date. That happened to be our last full day and so we made an early start taking the train south from Hiroshima station.

Beforehand I actually had no idea what the Yamato Museum (below) was about but it was soon obvious on entering the place (500 yen) that it was a maritime museum. 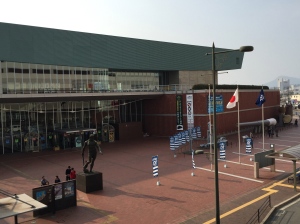 Taking centre stage is a one-tenth scale model of the battleship Yamato (above) which has been reconstructed based on designs, photographs and so on. The world famous  Yamato was considered the most technologically advanced warship of its time and played its part in helping to modernise Japan.

On the first floor to the side of the Yamato is an exhibition room conveying the fascinating history of Kure which was renowned for having the world’s best naval engineering. Information in English was sufficient enough for me but some people may want to know a lot more than what is provided. I was kindly given an English language headset for free which thankfully didn’t waffle on and on like in some places. Quite the opposite actually as the accompanying commentaries were very short and concise.

The history of Kure section explains the significance of the city in the very early twentieth century and how it flourished to become world famous for ship and tanker building. Due to it being Japan’s largest naval dockyard, Kure became a target for air raids by the American military and was subjected to a total of 14 with six of them being particularly fierce.

The suicide mission bound for Okinawa brought an end to it’s life in April 1945 and the information on this, including some heartbreaking personal accounts of loss, promotes a message of the senseless nature of war and hope for world peace. 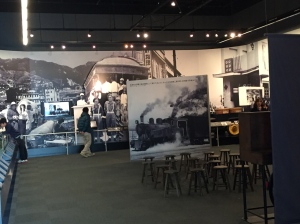 The Large Objects Exhibition Room (below) gives you the chance to get up close with some authentic high valued items such as fighter planes, human torpedo’s and a submarine itself. 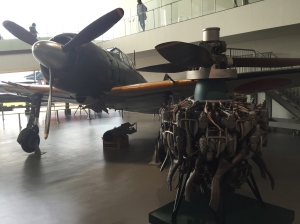 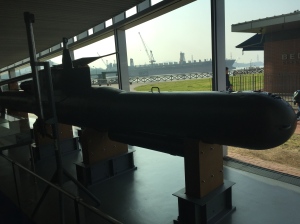 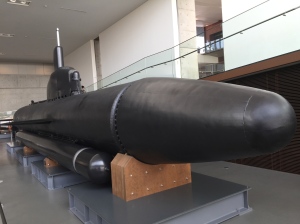 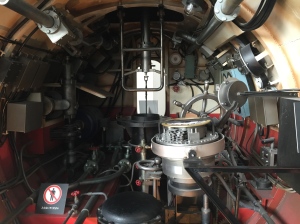 The upstairs area is a very kid-friendly area and introduces some principles of science and technology through hands-on learning such as a ship handling simulator and finally outside is the Shinkai Research Submarine. This was in operation between 1970 and 1981 and had the greatest depth range (600 metres) of any manned research vehicle in Japan. 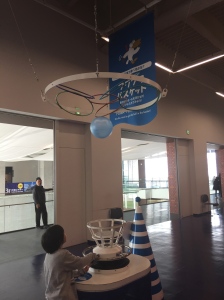 Over the road (below) from the Yamato Museum was something long, hard and full of seamen! 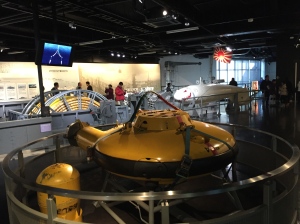 I’m of course talking about the black submarine adjoining the JMSDF Kure Museum a.k.a. the Whale of Iron Museum. It’s 76 metres in length, weighs 2000 tonnes and was in service from 1985 to 2004 which was far more recent than I thought. Inside, there was information and exhibits relating to its functions, history, threats, rescue, technologies and the path to becoming a submariner as well as what life is like as one. 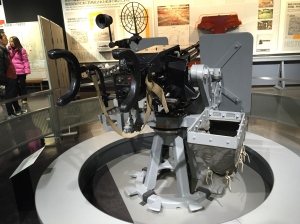 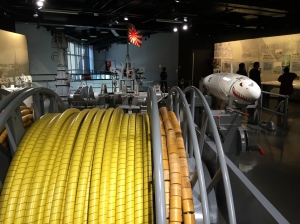 Minesweeping has been a continuous mission since the end of WWII and there’s a section introducing activities of mine warfare force ranging from operation and techniques to introducing new sea routes which supported Japan’s postwar rehabilitation to international contributions in Operation Gulf Dawn. 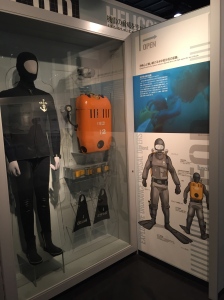 This place is free to enter and in some ways a more fascinating place as you really get to experience the interior surroundings the submariners found themselves in. It’s not every day that you get to board a real submarine, sit in the driving seat and sample such hardships like narrow corridors and beds with very limited room for manoeuvre.

How to get there: Trains go direct from Hiroshima station on the JR Kure line Rapid Liner (33 minutes) costing 500 yen. From the station it’s just over 500 metres away on foot and is clearly signposted.

For other reports from our Hiroshima-ken 2015/16 trip click on the following links:

A Leicester City fan teaching English in Japan
View all posts by tokyofox →
This entry was posted in Japan Life, Japan Travel and tagged day trips from Hiroshima, how to get to Kure, JMSDF Kure Museum, JR Kure line Rapid Liner, Kure, minesweeping, things to do in hiroshima, Whale of Iron Museum, Yamato Museum. Bookmark the permalink.