Hiroshima-ken 2015/16 Pt IV: A Walking Tour Plus Other Various Bits And Pieces

When my sister and her family visited visited Hiroshima last year she picked up an  alternative sights pamphlet and passed it on to me when they they visited Tokyo after that. It included the Futabanosato Historical Walking Trail and Mitaki Temple which I did on my last visit in May 2015 and one other tour included a stroll between Yokogawa station and the Memorial Cathedral for World Peace.

This wasn’t done so much for the sights but for something to do on New Years Eve and to get me out of the house for a bit of fresh air and exercise away from the tourist hordes. The air was certainly fresh for it was a bitterly cold Winter’s morning during a period when the weather was incredibly mild for the time of the year.

First up was Misasa Shrine (above) which is a very short distance north of Yokogawa station as this fairly ordinary looking shrine is home to one of the trees that survived exposure to the atomic bombing of 6th August, 1945. The camphor tree (below) is approximately 1850 metres from the hypocenter and was later replanted at the shrine.

Back on the other side of the station across the Tenmagawa River is Hosenbo Temple (below) which was next and also possesses a bombed tree that takes centre stage. There are actually 170 remaining A-bombed trees within an approximate 2km radius of the hypocenter which is quite remarkable given that it was said that nothing would grow in the area for 75 years after the war. 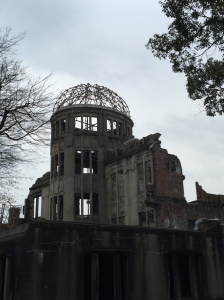 It really was a cold morning and after I passed the A-Bomb Dome (above) I was so glad to get inside for a bit and warm up my hands and feet as I cut through some shopping centre en-route to my final port of call. That (below) was Nobori-machi Church; a national important cultural property constructed to serve as a memorial for the victims of the atomic bombing and the war, and as a prayer for world peace. 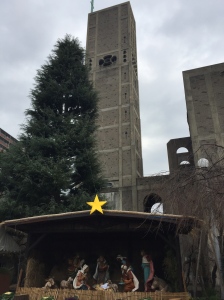 Bonus: Time now for all the extra little bits which haven’t really got an obvious blog entry to be slotted into. First, is the huge restaurant (below) which we went to on our first night in town and is by far the largest kaiten-zushi (conveyor-belt style) place I’ve ever been to…and quite possibly the nicest and tastiest sushi too.

Being able to watch a few live football matches (below) on my parents-in-law’s giant TV screen was nice and I was even able to enjoy an Emperor’s Cup semi-final match with some Cadbury’s Dairy Milk Caramel which my mother-in-law had bought at the airport on the way back from our trip to Singapore last month. As well as the final on New Years Day I also watched the Empress’ Cup Final which was sandwiched in between the two as the legendary Nadeshiko Japan player Homare Sawa brought the curtain down on her long  career with the winning goal. The chocolates were this time replaced with Momiji the dog.

More sport now and it was table tennis (below) that my mother-in-law wanted to play against me this time (we played tennis back in Golden Week last year). Back in the late 90’s I used to play the game fairly regularly during the Summer holidays and it really did feel good to have a knockabout. 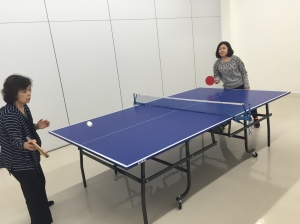 The sunrise (above) was shot from the apartment on the morning after I had got up at 5am for a midweek Foxes football match. My father-in-law regularly gets to see such a beautiful sight and it was a great way to start off the day when I went to Onomichi by myself to track down the filming locations from Japanese animated series ‘Kamichu!’ (2005).

Spending time with Momiji (below) is always a highlight of any trip to Japan’s 10th largest city and a lot of time was spent in her presence playing with her, walking her and so on.

One of the things I most like about Hiroshima is all the mountains in the vicinity. On our final day I went out alone to climb the nearest mountain to the apartment which is Mount Kairoyama standing tall at a whopping 50 metres or so! On another afternoon we returned to Gokurakujiyama which we first went to in March 2014. Gokurakujiyama roughly translates as heaven temple mountain but it was a little cloudy this time so the views were slightly restricted.

On the way back from Gokurakujiyama we stopped somewhere and I saw this shrine torii gate (below) which I guess was part of the Christmas and New Year illuminations. 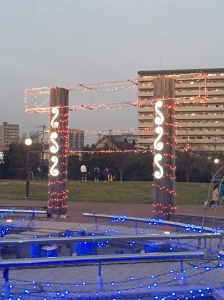 The final picture (above) is of a simple but very tasty dish we ate called kawara soba which consists of baked soba noodles, scrambled egg, beef, seaweed and grated daikon radish. This is a speciality of the neighbouring Yamaguchi prefecture and is usually served on a heated kawara tile. Soldiers would heat kawara tiles during the civil war in the 19th century and cook wild grass and meat on them and thus kawara soba was born.

4 Responses to Hiroshima-ken 2015/16 Pt IV: A Walking Tour Plus Other Various Bits And Pieces