When it comes to snowboarding in Japan there are many good places but it is Hokkaido which is the place held in highest esteem by those in the know. As much as I enjoyed all my previous snowboarding trips to Nagano-ken there has always been that desire to partake in some action on the mountains in Niseko where the all-too-common icy slopes (in my experience!) give way to some fantastic snow in one of the worlds best ski resorts.

Last weekend I was back on Japan’s most northerly main island just over half a year since I last visited and yet again I was joined by my regular partner-in-crime Ethan……but we  only just made it though! On the Friday we travelled I was heavily delayed on the train and only just managed to check-in in the nick of time. Meanwhile, Ethan’s flight was delayed too and at the airport I had already told the bus company we’d take the next one an hour later……when suddenly Ethan and a bus staff member came sprinting through the terminal with just a couple of minutes to spare.

2.5 hours later we were in Niseko and collected in minivan by the manger of the Australian Alpine Club; our lodge for the next three nights which was about 15 minutes walk from the slopes and full of Aussie’s and Kiwi’s with a Brit or two too. Nothing too different there as Niseko is basically mini-Australia during such seasons and they must make up about 95% of all people in the area. It was maybe no surprise then that there were Australian breakfast spreads such as Vegemite on the table each morning! 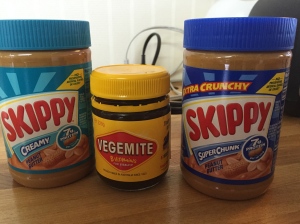 We had two full days of snowboarding and the weather was great on both days albeit very contrasting. On the Saturday it was a beautiful day with clear blue skies (I was told we’d brought the sun with us!) and the following day was snowing on and off thereby topping up the already-plentiful soft, white, fluffy, powdery snow. The temperature on that second day was close to -15 degrees celsius and the icicles (below) outside the restaurants were quite impressive. 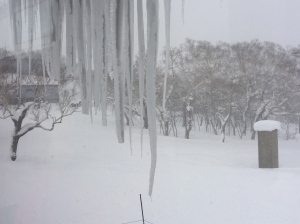 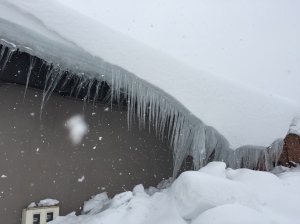 It took us about 30 minutes to get our lift passes (13,800 yen for a two day mountain pass) by which time the long line for the main Hirafu gondola had gone down. Our passes allowed us to use the main four ski areas (An’nupuri, Higashiyama, Hirafu, and Hanazono) where there were plenty of vast and long runs through the endless powder. 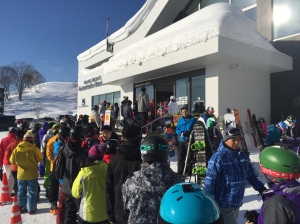 Although I went snowboarding quite a bit in the latter half of the 2000’s, this was actually my first time to do it for four years but like riding a bike it’s not something you forget and in no time I was back to the same level I was before……which is pretty average at best!

Towards the end of day one I unfortunately fell badly on my little pinky (right hand) and was in such pain for the next 36 hours or so before it miraculously recovered. I could hardly move it on the Saturday night and was sure I had done some serious damage to it akin to what happened to my other little finger back in 2010. It was really hurting when I woke the following morning but with the gloves on it felt much better and I hoped that I’d be able to just shake off the injury and forget about it.

An onsen (hot spring bath) was how we finished off each day which was so welcome after the punishment that our bodies had taken on the slopes. The pain on my calf muscles was pretty unbearable at times so the two hot baths (one inside and one out) as well as the sauna and even the subsequent cold bath were all delightful.

As for food, I took a break from my New Years diet in order to enjoy some of the local delicacies and, though I had a few beers, I did stay off the soda, chocolate, biscuits, crisps and so on which I was happy with. Miso ramen has long been one of my favourite types of this noodles-in-broth dish and yet again in Hokkaido this was the first dish for us to sample. The restaurant we chose was a very popular place where we had to wait among large groups of Aussie’s trying to get tables of eight in busy, small places. Kind of funny to watch but also a bit annoying. 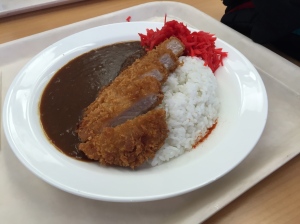 For lunch I had katsu curry and rice (Saturday) and tempura udon (Sunday) of which both (above) were very nice but a little overpriced compared to what I’m used to in Tokyo. What was also interesting to see over the weekend was that English was everywhere and it was actually quite strange to see the names of certain food items which I have only ever known in Japanese.

We went a bit more upmarket on the second night and went to Odenzushi. Ethan had  salmon nabe whilst I had jingisukhan (below) which is a Hokkaido speciality named for the reason that in pre-war Japan, lamb was the meat of choice for Mongolian soldiers. The dome-shaped metal skillet it’s served in supposedly represents a soldiers helmet and rumours are they they even used to boil up the food in them.

Ahead of this trip I was a little apprehensive about Niseko as I’m used to being surrounded by mostly Japanese people so to still be in Japan but with so many Australians was a little strange. The Aussie’s though are very friendly people and much more communicative than the natives so it was quite nice to talk with and understand the conversation when alongside them in the restaurants or on the chair-lifts.

For reports from our 2015 Hokkaido trip click on the following links:

1 Response to Snowboarding Trip To Hokkaido