On the back of re-watching and reviewing ‘The Yakuza‘ (1974) towards the end of last year, this was the obvious film to follow that up. Unlike that one though, this gets straight into the action from the offset as Viggo Mortensen, who later went on to play Aragorn in the ‘Lord Of The Rings‘ trilogy, goes about his business as a forklift driver in a factory warehouse owned by Yakuza.

However, when the place comes under siege, Mortensen’s “Nick Davis” helps protect the workplace and saves the representative of Yakuza interests in America, Shuji Sawamoto (Ryo Ishibashi) who he helps rehabilitate. Some time later, Shuji thanks Nick and impressed by what he witnessed, offers him the chance to work for them. This part does seemingly all happen a bit too easily with very few questions asked by either party! In the wake of the attack on the Yakuza, a war develops between the two gangs with the FBI trying to keep them both at arms length.

It is soon revealed on screen that Nick is actually an undercover FBI agent (called David Brandt) infiltrating the Yakuza but as time goes on it’s the classic case of him getting caught up in his new line of work where he wins the trust and respect of the organisations members and is inevitably torn between his work obligations and his loyalties to Shuji.

Nick is told to do whatever it takes to stay deep undercover and after being bought a huge house by Shuji, he then gets romantically attached to his goddaughter and is later made an honorary member of “the family” at a formal ceremony where he is informed that his duty is to the family now. If you can suspend the believability that the Yakuza organisation would actually ever accept an outsider into their ranks then it’s very much an enjoyable but predictable low-budget film. To its credit, the film does actually try and justify such an inclusion.

‘American Yakuza‘ has the look and feel of an 80’s movie so I was quite surprised to discover afterwards that it was from 1993. The characterisation of the supporting cast, in particular, can be quite stereotypical I guess with its inclusion of a cigar-smoking Italian mafia boss, the Asian eye-candy love interest and the volatile younger assistant Yakuza member who is far more suspicious and accepting of the outsider joining their ranks. The actor behind this is actually the main antagonist from ‘The Karate Kid Part 2‘ (1986).

The humour is good in part such as the music tape scene on the collection rounds featuring the infectious and overly catchy ‘Won’t Be Long‘ by The Bubble Gum Brothers (1990) which is a real feel-good song and one you can’t help but sing or hum long after viewing the film. More subtle humour is the Japanese table etiquette scene where one Yakuza guy still places his chopsticks down on the table in the correct manner rather than throwing them down angrily as you might expect. It’s funny to me that Nick is using a fork for his bento lunchbox and reacts by placing that down in similar fashion too.

The story is a fairly solid and dramatic one about relationships which as ever, in any Japanese-related film, bangs on about the code of honour. It’s an entertaining 90 minutes and it’s interesting to see that emotions do come into play when someone has infiltrated an organisation and begins to get attached to it. The two main stars of the film are strong and believable enough in their roles for me and it is the connection and bond between them which is the driving force behind this film. 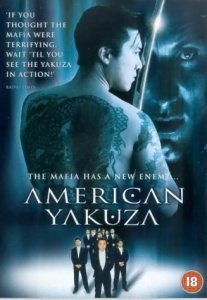 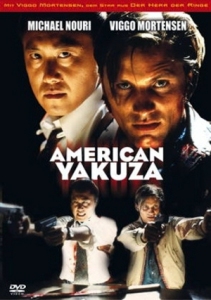