Leicester City are playing Norwich City in the Mr Clutch Cup Final at Wembley Stadium. From the film’s opening scenes it’s obvious that those teams playing in a final can only be the work of fiction!! (*) Mike Bassett (Ricky Tomlinson) is in charge of the latter as they triumph 3-2 propelling him to fame and eventually the England hotseat. 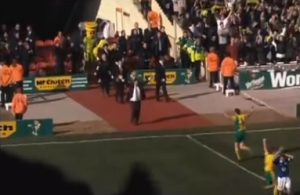 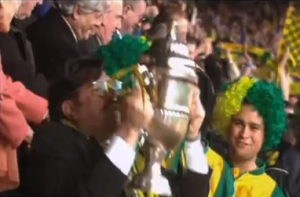 (*) Now that opening line was actually drafted a couple of years ago when I originally compiled these limited filming locations for this fly-on-the-wall mockumentary. Who on earth thought that my beloved Leicester City would ever go on to win the Premier League of all things. The kind of thing that no film scriptwriter would even come up with!!

There have been many football films over the years and to be fair they’re usually pretty poor but in my opinion ‘Mike Bassett: England Manager‘ is actually quite good with great attention to detail in places. It delivers a few good laughs with it’s references to the real world of football and how being manager of the national team is one of the most pressurised and stressful jobs in sport due to media scrutiny and fan expectations.

Back in the dark ages of using video recorders, I remember watching this satirical comedy film with my parents so the opening match featuring my club and my dad’s team playing against each other was quite a moment. The one featured in the movie was the original Wembley Stadium with its twin towers whereas it’s the new one in my picture below with the huge archway. It opened in 2007 and the home dressing room was used for many scenes throughout the 89 minute movie. The closest I’ve got to this station can be seen in my photo which was taken one snowy winter about five years ago! Wembley Park Station on the Metropolitan and Jubilee lines is the closest tube station but Wembley Station on Chiltern Railways is the nearest regular train station. 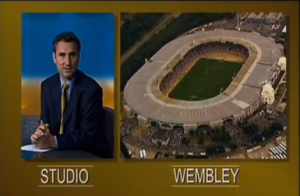 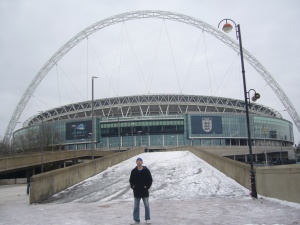 It’s kind of been forgotten that Leicester will go here for real in August to play Manchester United in the Community Shield final; a match which I sadly won’t be able to attend due to the timing of it and the distance involved. Still, I got to go to the old one around ten times and saw the foxes in action there for four Play Off Finals and three League Cup finals so I haven’t done too badly.

Another footballing location of a time gone by is 16 Lancaster Gate in Westminster (below) which was the original home of the FA before they moved to Soho Square. This played the true part of some boardroom scenes throughout the movie with its first appearance on two minutes. Lancaster Gate Station on the Central Line is the closest station lying just four minutes walk away. 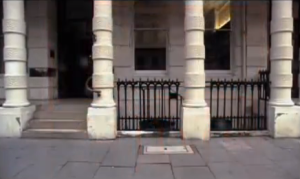 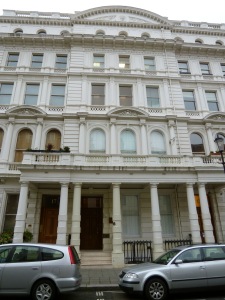 Bonus: As mentioned in ‘On Screen #4 – Brazil‘ last June, ‘Mike Bassett: England Manager‘ was partly set in Brazil as, having flukily qualified, England somehow stumble their way through to the semi-finals. 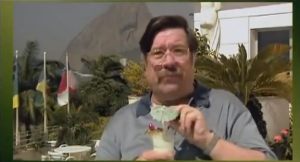 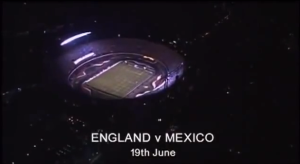 The drunken incident that occurred as a result of Mike mixing flaming sambucas with anti-depressants was filmed inside the Swiss Cottage Hotel at 4 Adamson Road. Swiss Cottage tube station on the Jubilee Line is a few minutes away on foot.

A press conference is scheduled in the wake of his shameful drunken partying where he is expected to resign from his managerial post but he decides to carry on in the job and amidst the press hostility he recites ‘If—’ by Rudyard Kipling. England supporters can be seen watching this on the big screen television inside The Elgin pub at 96 Ladbroke Grove.

It’s from the big screen to the small screen as the film was followed by a six part TV series on ITV in 2005 called ‘Mike Bassett: Manager‘ which you can watch here via YouTube.