On The Trail Of John Rain (雨) Part X – Paris

Throughout the Rain series of feature-length books, anti-hero John Rain is the principal persona but he has often been ably assisted by a supporting cast, and some of those characters have been the main feature of short spin-off stories. These have followed Larisson, Delilah and Dox; the latter of which I covered last year when I was in Phnom Penh in Cambodia.

Delilah stars alongside the main man himself in a download-only (Kindle or audiobook) story called ‘Paris Is A Bitch‘ (2011) having first appeared in the 5th Rain book ‘Extremis‘ (originally published as ‘The Last Assassin‘) in 2006. She is a smart, sexy and sophisticated Mossad operative fluent in Hebrew whose profession is to seduce potential terrorists and help attain information about them before they are assassinated. 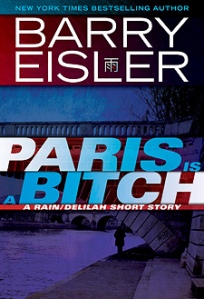 She and Rain were bound by a mutual understanding of each other’s professions and eventually became lovers. She is usually based in the capital of France and Auberge de la Reine Blanche on the Ile Saint Louis is the key restaurant setting for the short-story but there were some other locations used in the fifth and sixth Rain books. Whilst in Paris for 24 hours way back in January 2012 I was mainly on the trail of filming locations from ‘The Bourne Identity‘ (2002) and ‘Amélie‘ (2000) but I thought it would be a shame to not also hunt down a few Rain locales.

We find out at the start of chapter 19 (page 155) in ‘Extremis‘ that one of Delilah’s favourite Parisian cafes is Chez Prune (below) on the Canal Saint-Martin. It can be found at 36 Rue Beaurepaire and Jacques Bonsergent station on Metro Line 5 or Goncourt on Metro Line 11 are five and ten minute walks respectively.

Rain was a fan of the coffee culture in Paris where he was kind of living with Delilah and they would have dinner each week at Le Petit Célestin (above) at 12 quai des Célestins Sully-Morland on Metro Line 7. This place is name-checked on page 26 of the 2007 Rain novel (#6) ‘The Killer Ascendant‘ (formerly known as ‘Requiem For An Assassin‘).

Le Loir dans la Theiere (below) at 3 Rue des Rosiers is close to Saint-Paul station on Metro line 1. On page 27 of book #6 Rain and Delilah have café crèmes and croissants at this restaurant where the interior has references to Alice in Wonderland’s tea party. Rain is a fan of its mismatched chairs, small wooden tables, eclectic wall art and its everlasting aroma derived from years of fresh ground coffee. 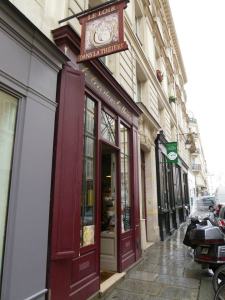 A Leicester City fan teaching English in Japan
View all posts by tokyofox →
This entry was posted in Books, Euro Travel and tagged A Dox Short Story, barry eisler, john rain, John Rain Paris locations, Paris, Paris Is A Bitch, Requiem For An Assassin, The Killer Ascendant. Bookmark the permalink.