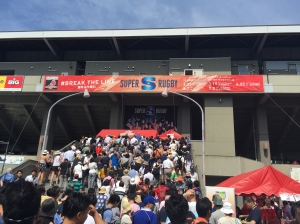 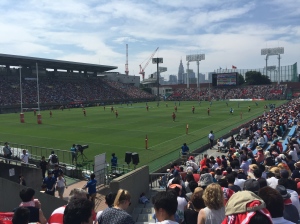 Ever since that momentous late win for Japan against South Africa in the 2015 World Cup, rugby has been on the rise in the land of the rising sun. It’s that nickname combined with the wolf (representing bravery, strength and an ethos of teamwork) that results in the name of Japan’s representative team in the 2016 Super Rugby competition.

Little did I know that the hat I found myself wearing (below) back in April at our cherry blossom party was actually a Sunwolves one. The penny finally dropped as I rolled on up to the stadium (from the nearby Gaienmae station) and saw a load of people wearing them. It certainly wasn’t the day for wearing such head ware as it was a sweltering afternoon (35 degrees celsius!) at Chichibunomiya; the kind of conditions which I don’t really associate with rugby as the few times I have watched Leicester Tigers play back home in the UK it has been cold and wet with the game played on a muddy pitch! 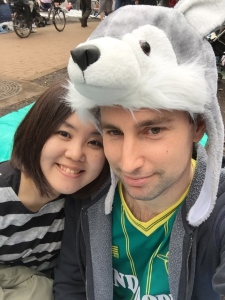 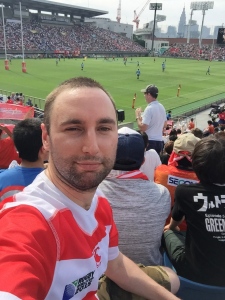 As someone who usually works on Saturday I rarely get the chance to attend any live sport on that day but as it was a school holiday I was free so decided to join a couple of mates to see the Sunwolves in action against the Waratahs from Australia. Having only watched Scotland beat Japan at the Ajinomoto Stadium the previous Saturday I was not expecting to see another live rugby match so soon! A record home rugby crowd of 34,073 people watched that and a big crowd (18,147) was in attendance at this one too with a lot of foreigners seemingly present. 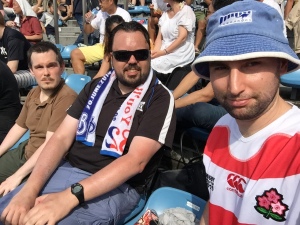 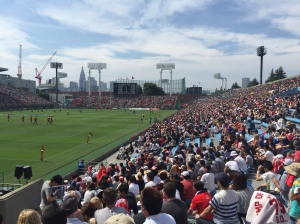 The Sunwolves are as new a team as you can get in rugby and it’s been a testing time for them in their inaugural season. This franchise team was assembled way too close to the season opener and they really didn’t give themselves enough time to prepare for the year ahead. One win, a draw and some highly respectable narrow defeats have been the highlights of the season but there was to be no fairytale ending in their final home match of the season. 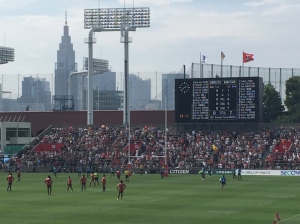 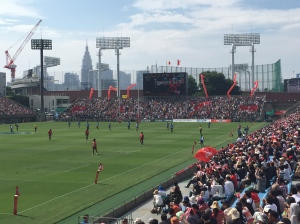 The first half was fairly evenly matched and perhaps the highlight of the half for the home team was when Riaan Viljoen kicked a 57 metre penalty. (A long kick but not as long as this one though!). Their other nine points came from the boot of Yu Tamura and after his second successful kick on 26 minutes the Sunwolves actually led 9-7 for a short time. 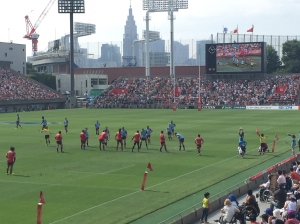 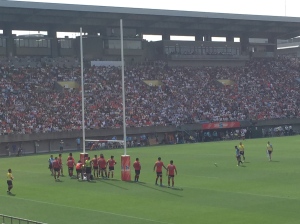 It was one way traffic in the second half though as the New South Wales team laid down try after try as they ran riot adding five more tries to their first half tally of four. The Sunwolves barely made any advance into their opponents half and even with twenty minutes to go people were already starting to head for the exits. I’ve never really understood why people leave before the end but it was something I had to do due to a prior engagement I’d made to get over to Kashiwa in Chiba for a football match. 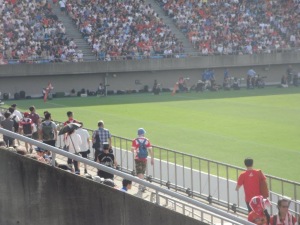 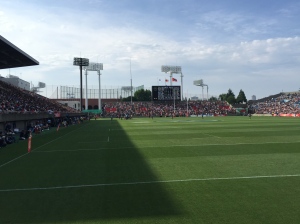 Click here to read ‘日本 vs スコットランド (Japan vs Scotland)’ 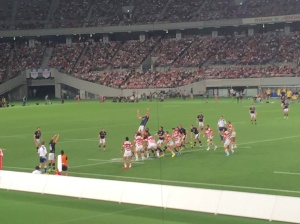 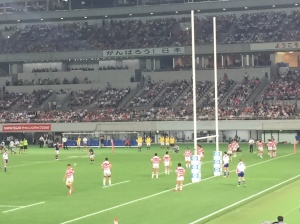 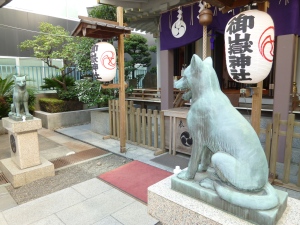 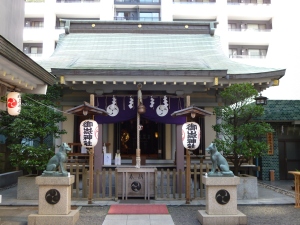 2 Responses to Another Live Rugby Match: Sunwolves Vs Waratahs