The food may be different but the Japanese New Year is quite similar to the British Christmas in that it’s spent mostly in the home with family eating and drinking. Despite staying in Tokyo for the Christmas period in Tokyo the lure of spending the New Years holiday with her family was always going to be difficult for my wife to resist so we returned to Western Japan for our fourth visit of the year. This time though we ventured over to Hiroshima closer to New Years Eve unlike the year before when we flew over on December 26th. 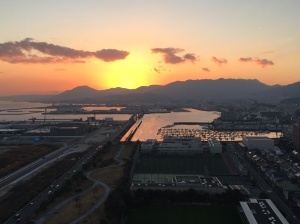 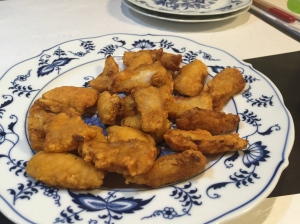 We ate a wide variety of food during our stay with my in-laws and first up was fugu (above) which I haven’t eaten since a student took me to eat it a decade ago. On that occasion it was served up in many ways but this time it was just the fried variety. For those who don’t know this is the fish with poison that can only be made and sold by specially licensed sushi chefs. A number of people die every year from eating fugu (blowfish) as they under-estimate the amount of poison in certain parts. The fact that I am here to re-tell my story reveals that I survived the ordeal!

Okonomiyaki is the classic Hiroshima which is always on the menu at some point when we visit (usually due to my demand!) but this time we ate the pancake-type dish at home. Sukiyaki is a common Winter dish that is prepared and served in a Japanese hot pot which is also shared communally. It consists of meat (thinly sliced beef), vegetables and other ingredients slowly cooked or simmered in a mixture of soy sauce, sugar, and something called mirin. It’s eaten in a small bowl consisting of a raw, beaten egg and is very tasty. 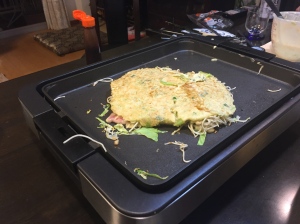 For the second round, udon noodles (below) were added to the pot. The other dish pictured  beneath is called kuromame and is basically just a load of sweet black soy beans which provide part of the traditional New Years meal. 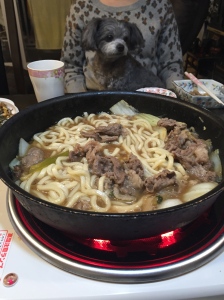 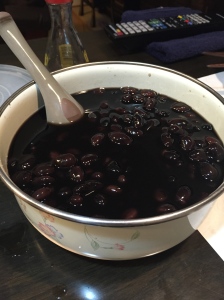 The word toshikoshi means to climb or jump from the old year to the new and so on New Years Eve most Japanese people eat toshikoshi soba noodles (below) in the last couple of hours of the year. I was still pretty stuffed from dinner a few hours earlier but just about managed to slurp down my bowl of noodles. With all this eating, my face could well look more similar to the masked version of me! 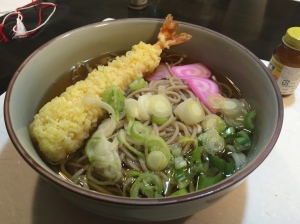 The food seen below is known as Osechi; an array of colorful dishes packed together in special boxes called jubako which are eaten communally on New Year’s Day and for just about every meal after that for a few days until its all gone. I was pretty much sick of the sight of it all by the 3rd when all that remained were the less appetising foods.

Before the Osechi though, 2017 had got off to a fine start for me with Leicester beating West Ham 1-0 in a match that kicked off at midnight Japan time. Much later that morning my wife and I took Momiji for a walk at the nearby Kairoyama mountain. It’s only about 50 metres in height but is always a nice, easy place to go and take a short break from being inside too much. On the way back we passed the same shrine (Shio-ya jinja shrine) where we did hatsumode (symbolic first visit of the year) as a family 12 months before. 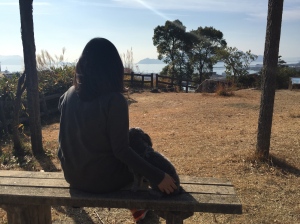 In the afternoon, I settled down in front of the TV (below) to watch Kashima Antlers and Kawasaki Frontale compete in the Emperors Cup Final which is Japan’s oldest football competition and dates back to 1921. The former won the game in extra time to cap a remarkable season which is still a little hard for me to believe as I watched my J-team Kashiwa Resyol tear them apart on their patch back in April last year. 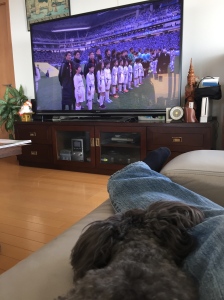 As ever, when we are in Hiroshima a lot of time is spent with Momiji so below is a selection of the various pictures I took of her chilling out at home. 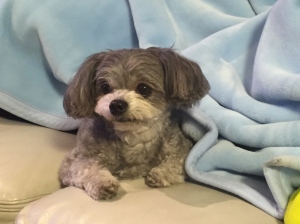 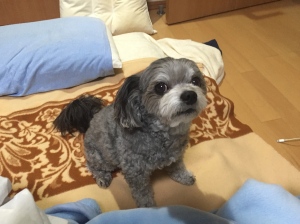 A Leicester City fan teaching English in Japan
View all posts by tokyofox →
This entry was posted in Japan Travel and tagged Emperors Cup Final, hiroshima, kairoyama, momiji, New Years in Japan, Shio-ya jinja shrine, things to do in hiroshima, toshikoshi soba, what is sukiyaki?. Bookmark the permalink.