The infamous Aokigahara, known as Suicide Forest in Yamanashi prefecture, has inspired a few films in recent years such as ‘The Sea Of Trees‘ (2015), TV movie ‘Grave Halloween‘ (2013) and then there was this horror and by that I am referring to it’s genre although many people would say that word sums up this 93 minute film! 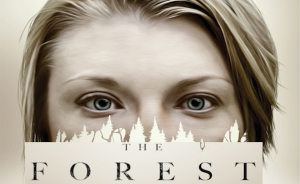 The film opens with Sara receiving a phone call from someone saying that they saw her twin sister Jess go in to Aokigahara forest; a 35-square-kilometre forest lying at the north-west base of Mount Fuji. She goes to Japan and it’s Yasukuni Dori time as she is driven down the famous Shinjuku street in the back of a taxi which is the clichéd scene now for all foreign productions that actually come to Japan.

Actress Natalie Dormer does a reasonable job of performing the dual roles of the twin sisters and dyed her hair to distinguish between the two. As the more pure and innocent sister, Sara’s hair is blonde whilst her more psychologically troubled twin Jess has black hair which no doubt has some more spiritual symbolism that goes beyond me.

Given the notoriety of the forest you would have thought that Sara would have done a bit of research on the place but instead she heads off there straight away and meets a journalist guy in a bar who offers to accompany her in return for the story of her and Jess. He introduces Sara to a guide called Michi whose name fittingly translates as path in Japanese. Michi explains that spirits of the dead still reside in the forest but cannot rest there and thus return angry. They are warned that their minds will play tricks on them with regard to what they actually see and that they must not believe them.

If has to be said that if it wasn’t for my interest in this forest I wouldn’t have found it anywhere near as tense, and to be fair it still wasn’t that tense! Neither was it the real Aokigahara for the Japanese government do not permit filming to take place there. Instead, the forest scenes were actually shot at Tara National Forest in Serbia where the unpredictable weather plagued the production at times.

The premise of ‘The Forest‘ is pretty interesting, it is well-shot and has a promising build up but sadly it never fills its potential and ends up becoming a walking tour of cliched horror moments and cheap jump scares. Whilst it is not an awful movie overall, there really isn’t that much on offer for it to be considered in any way good. I actually had the movie marked down as going in another direction so maybe that surprise was a positive of sorts.

As tends to happen with Japanese horror films, there is the ubiquitous schoolgirl who is supposed to be a creepy presence whenever she appears whether it be following Sara or a few steps ahead of her. None of these scenes seemed relevant to the plot in any way but that kind of thing rarely matters in this genre! The problem with her was that she just wasn’t as harrowing as the filmmakers may have hoped for and all she ends up doing is luring the fairly brainless lead character (deciding to spend the night in Jess’s tent against the will of her guide is enough alone to prove that!) off the main path.

Horror movies really are very dependant on the soundtrack to ramp up the tension of the situation and that is very apparent here when there’s not much happening. I can deal with that if there’s some kind of vaguely satisfying outcome which ultimately there isn’t in my opinion. Instead, it comes across as a YouTubers guide to the forest at times.

A Leicester City fan teaching English in Japan
View all posts by tokyofox →
This entry was posted in Review: Films Set In Japan and tagged Aokigahara, films set in Japan, horror movie, list of films set in Japan, Natalie Dormer, suicide forest, The Forest, The Sea Of Trees. Bookmark the permalink.