Haikyo (abandoned ruins) has long been something that has fascinated me. Such classic examples of haikyo can include derelict hotels, abandoned theme parks, deserted ghost towns and relics of WWII. Often they are very difficult to get to and are well sealed off from the public but this one is easy to track down as it’s located in a park in the western part of Tokyo Metropolis. 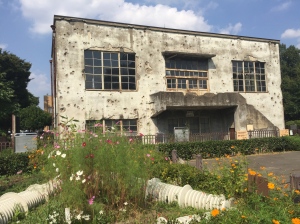 From afar it looks just like a very normal building but when you get up close you certainly notice the devastation of the place. 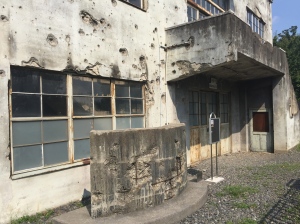 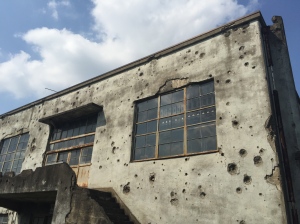 This damaged building was designated as a historic site on October 1st 1995 but it’s history obviously dates way back in time. It was originally an electric substation for a military supply factory. Tokyo Gas Electric Engineering Co Ltd built the factory in 1938 and then 12 months later it changed its name to the Hitachi Aircraft Co., Ltd Tachikawa factory.

On February 17th and then again on April 19th (in 1945) it was attacked and bombed from the air killing over 100 people and injuring another 100 or so.

There is a little fence surrounding the damaged factory which was actually in use till 1993. As you can see no repair work was done but when the city council decided to turn the site into a park there was a plan was to demolish it. However, local residents lobbied for it to be preserved. 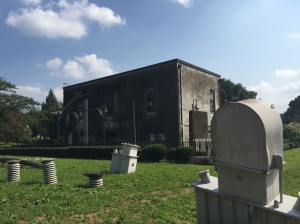 After the war, a number of buildings with evidence of war damage were knocked down but thankfully this place still stands still and sits as a grave reminder of the effects of those WWII air raids.

How to get there: Higashiyamatominami Park is located at 2-106-2 Sakuragaoka, Higashiyamato and the closest station is Tamagawajosui on the Seibu Hajima Line.