Three Of A Kind: Dragon Torii Gates In Tokyo

For foreigners in this country there is something very alluring about the torii gates at shrines which are seen to be very symbolic of Japan. Some of the most famous ones for tourists probably include the floating torii of Miyajima in Hiroshima, the hundreds of them at Fushimi Inari Shrine in Kyoto and the one on the banks of Lake Ashi in Hakone.

Regular Tokyo Fox readers may remember that I have scribbled some posts before about three being the magic number in Japan when it comes to the likes of Inari Shrines and gardens, and dragon-decorated torii gates in Tokyo fall into that category too. It’s the red ones which are most famous but they actually come in all manner of sizes. Traditionally they are made from wood or stone but there are also some made of different materials. Just three of them feature dragons on them and by chance I recently visited them all in the space of a few days.

It’s believed that these three torii gates are power spots and you can gain power and have your wishes granted by touching the pillar with the climbing dragon on it.

First up was Shinagawa Shrine (3-7-15 Kita Shinagawa, Shinagawa-ku) which I previously visited when Cycling The ‘Ten Shrines of Tokyo’ In One Day around five years ago. Sadly none of the pictures in that link really showed off the torii gates so I popped along there recently during a break at one of my schools in Gotanda.

Shinagawa Shrine is the large shrine in this complex and shares it’s sight with three smaller shrines. The stairs behind the gate can be seen briefly in ‘Shin Godzilla‘ (2016) although I suspect it was actually filmed elsewhere despite the screen caption saying it’s this shrine. 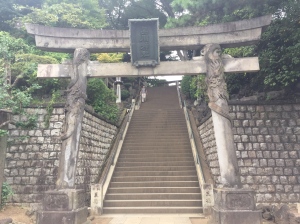 A few days after that I visited the other two which are very close to each other in Koenji. It wasn’t my first trip to Mabashi Inari (2-4-4 Asagayaminami, Suginami-ku) either as I cycled there a few months ago. Just beyond the main entrance gate on the pathway leading to the main hall is a striking stone gate depicting paired dragons. 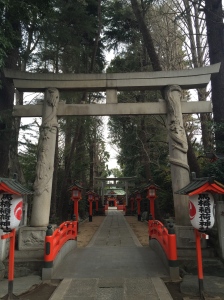 Just 1.2km away from there is the tranquil Koenji Temple (4-18-11 Koenjiminami, Suginami-ku). It’s not so often that temple and shrine co-exist together but to the left of the main hall is an Inari Shrine featuring the two dragons. One of the gate posts depicts a climbing dragon and the other possesses a descending dragon. 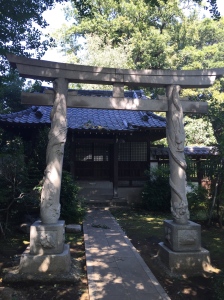 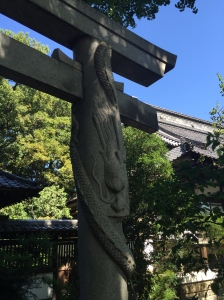 Bonus: Here are a couple more shrine gates in Tokyo which are quite unique. First up is Shinryō-ji Temple (2-7-25 Minami Shinagawa, Shinagawa-ku) a.k.a. the elephant temple  and after that is Mimeguri Jinja Shrine (2-5-17 Mukojima, Sumida-ku) which possesses a rare three-cornered torii covering a well.

8 Responses to Three Of A Kind: Dragon Torii Gates In Tokyo