This festival is the big one on the Australian calendar and one that I was lucky enough to attend back on January 26th (a.k.a. Australia Day) in 2002. These days I am only really aware of Big Day Out when some British bands start to appear in Tokyo for one or two Japanese shows en-route down under where this festival moves around some of the country’s big cities. Thanks to the journal that I kept at the time (available online at afoxdownunder.wordpress.com) we can now take a look back on all that happened 16 years ago on an epic day……

It was an early start (by our standards!) for Richard Richard and I as we caught a train to Olympic Park in anticipation of buying tickets from a tout outside the Sydney Showground. Sadly hundreds and hundreds of others were also needing tickets and they had more money than us! 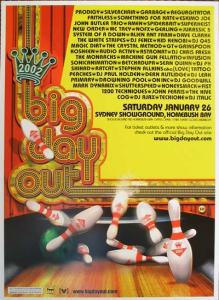 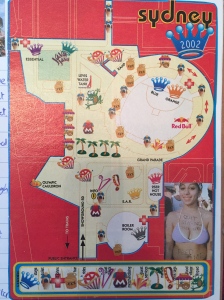 Tickets, though in short supply, were changing hands for between $150 and $200 although Richard Richard bought one for $250 in a moment of madness but saw sense and sold it minutes later for $250. However, he actually received $300 by mistake so not a bad minutes work for him!

We attempted to get tickets for a couple of hours via this method but were always getting outbid so gave up and turned our attention to jumping the fence. We saw and helped a few people enter this way but felt it was too risky and so turned to Plan C which was bribing a girl on one of the turnstiles to let us through without a ticket. Richard Richard went first and got a result so I followed him and offered $120 which was accepted. I didn’t have change though so paid $130 and once on the other side was distraught to learn that Richard Richard only paid $50!! I’d been prepared to pay $150 to a tout outside so it was kind of a result but my day was not going as well as Richard Richard’s!

The setup of the stages was quite unique for me as there were two main stages right next to each other with the bands alternating between stages meaning that there was to be very little down-time between sets. After a quick bite to eat and a couple of beers I queued up at the front of the Orange Stage ready to see Aussie band Something For Kate who played whilst I got very sweaty and squashed in the mosh-pit. Their song ‘Monster‘ was a huge Australian hit in 2001 and one that I loved but I wasn’t familiar with too many of their other hits so it was really enjoyable to hear their set.

I then met up with Richard Richard (who’d been to watch Infusion in the Boiler Room) and we went on a tour around the site including a legal drugs stall where I acquired some herbal speedballs which I felt I needed to get me going and take the entry costs off my mind. Sadly they just contained guarana and were about as strong as M&M’s!! 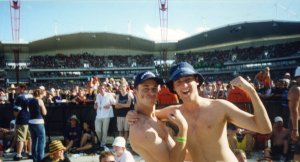 The next bands we saw were Regurgitator, Silverchair, New Order (looking a little old and fat not that that matters at all as their set was still excellent) and the headliners Prodigy whose set was good although a little disappointing as they didn’t play much old stuff and all the new stuff was over-vocalised.

When their set ended proceedings outside, we (along with thousands of others!) headed to see Basement Jaxx in the Boiler Room. So many people were in there that their set was delayed by 30 minutes and when they did come on thousands danced like crazy with the highlight for me being an amazing version of ‘Where’s Your Head At?‘.

Richard Richard left the set before the end to go toilet whilst I stayed till the set climaxed and somehow managed to still meet him outside the station (he didn’t have a mobile phone!) at the end. We went back to the hostel on the train for free and had a much needed shower (not together!) and were in our bunk beds just after 1am. What a day and I’d (just) managed to see the one event that I’d really wanted to see in Australia and so was happy in the end. My $130 entry fee was $35 more than face value but it’s not like I’ll get another chance to go the Big Day Out again!

A Leicester City fan teaching English in Japan
View all posts by tokyofox →
This entry was posted in Australasia Travel, Music and tagged A Fox Down Under Wordpress blog, Basement Jaxx, Big Day Out 2002 Sydney, Boiler Room, New Order, Prodigy, Richard Richard, Silverchair, Something For Kate, sydney. Bookmark the permalink.