This festival took place a week later than usual this year which meant that for the first time since 2005 and 2006 I was able to attend the second day of the event. Despite suffering with quite heavy jet-lag I couldn’t pass up the opportunity of a free ticket to this event which my friend Yuka gave to me.

For those not in the know this is quite literally an urban festival as it takes place at the Chiba Lotte Marines baseball stadium with all the other secondary stages indoors at the huge indoor exhibition centre known as Makuhari Messe (which is the same place where I attended ‘Star Wars Celebration Japan‘ four years ago) which is a 20 minute walk away across a very busy highway or you can even take a free shuttle bus. A world apart from Glastonbury and Reading!! 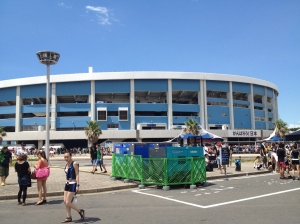 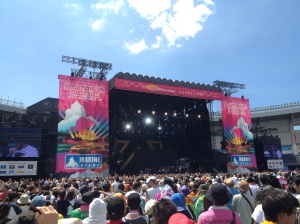 The atmosphere of Summer Sonic is also very different in that there really isn’t any! This festival is purely about the music only which in a way isn’t so bad but its just different. There is no crowd surfing, no sitting on shoulders, very little alcohol consumed, no photography, cleanliness (the rubbish collection is a highly organised operation which is probably a bit OTT but at least it means you’re not constantly standing on old bottles and cans), and silence and patience between songs. Oh and most Japanese wear towels around their necks to absorb the sweat. Nothing really wrong with all of these things but its just a bit too over-organised for me.

On arrival just after midday we headed straight for the main Marine Stage as Yuka wanted to see ‘Gym Class Heroes‘ whose name rang a bell but little did I know that I would recognise three of their tunes and very good they were too. As soon as that finished we were off to the indoor arena but Yuka didn’t hang around too long before heading back to the Marine Stage and we never saw each other again after that! 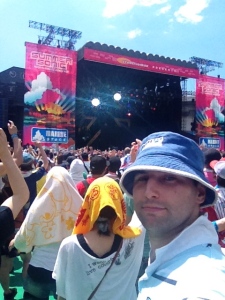 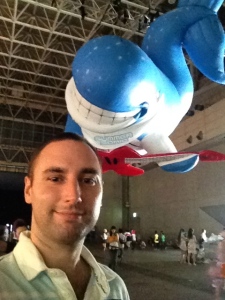 First up for me were ‘Cast‘ who I really liked back in the 1990’s. Back in 1994, possibly 1995, my best friend Ian Roper (god rest his soul) and I saw them play live at the Princess Charlotte in Leicester and after that I saw them many more times but I hadn’t listened to them at all since about 1999 before their set here which reminded me how many hit singles they had whilst riding along on the Britpop bandwagon. Great stuff.

Swedish band ‘The Cardigans‘ were on next and I was all ready to knock their set on here as it was billed as ‘The Cardigans plays Gran Turismo‘ which I thought ridiculous. Some bands like Blur have done such things in the past and just about got away with it but who wants to hear a whole album played?! As it was, they played a fair few other tracks too and I ended up really enjoying their set. When singer Nina Persson left the stage for a costume change mid-song it gave the two guitarists the chance to take centre stage and do a bit of strumming which they seemed to love a bit too much.

I needed a rest after that and so chose to sit out the set of ‘Hoobastank‘ but I could of course hear it whilst I laid down (along with many other Japanese fans who sleep in between sets on the exhibition centres floor which is not quite the same as passing out on a festival field) and it sounded better than I thought and if push came to shove then I’d have to say that ‘The Reason’ was my favourite ‘Hoobastank’ song!! Actually, the lead singer really got the crowd going. Proof that language really isn’t too much of a barrier in some ways although I’m not too sure if English or the native language of Taiwanese rock band ‘Mayday‘ (who were playing when I arrived at Makuhari Messe) is understood more. 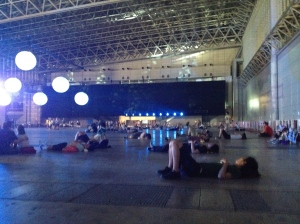 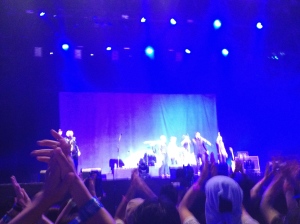 The last time I saw ‘Garbage‘ front woman Shirley Manson was during season two of ‘Terminator: The Sarah Connor Chronicles‘ where she played a bad terminator. Didn’t even realise her band had got back together until I saw they were on the schedule a few months back but she looked the ever-cool rock-chick (compared to Nina Cardigans more cutie look) and like the other 90’s bands before them I enjoyed stepping back in time and hearing them though I was starting to feel a bit jaded. 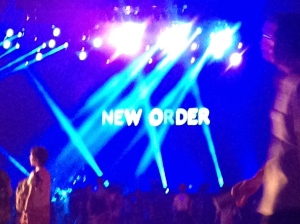 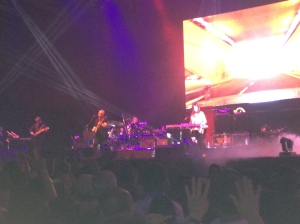 ‘New Order‘ were the headliners albeit without Peter Hook and his low-slung bass guitar. Lead singer Bernard kept the crowd entertained as they punched their way through their back catalogue of new wave and electronic music. Their sets can come across as a jamming session at times given the dominance of the guitar/electronic solos and lack of vocals but I don’t really mind and haven’t danced or moved so much since, well probably the last time I saw them play which was 10 years ago at the ‘Big Day Out’ in Sydney. They finished their set at around 9.30pm with an encore of two Joy Division songs.