In my review of this film last year I said that the grounds of the Shokoku-ji buddhist temple in Northern Kyoto were used throughout and that they have supposedly remained unchanged since it was founded in 1382. That may be so but sadly the part that was used in the film is the one branch (there are a few dotted around the area) that is pretty much closed and only open once or twice a year for special events.

This movie, first released as a TV movie called ‘The Sword of the Ninja‘, was shot entirely in Kyoto with principle shooting taking place at the aforementioned Shokoku-ji Temple which is just across from one of the exits of Imadegawa Station on the Subway Karasuma Line, just north of Kyoto Station. The entrance (below) is about the only part I could really capture as it’s seen on film.

It is located besides a branch of CoCo Ichibanya curry restaurant and next to Doshisha Univ. Muromachi Campus. I’m not really convinced that the next shot (below) is the same but it is possible I guess as it has been over 35 years since they filmed there.

Stay with this post till the end though as there are some other locations from other places in Kyoto but I’ll just include a couple more photos (from the limited area I could see!) and a bunch of screenshots from inside the temple proper. 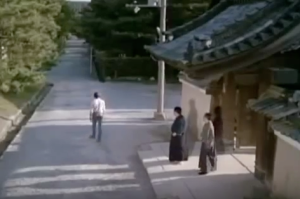 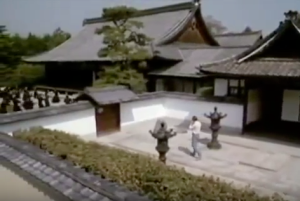 Before any scenes at the temple, the International Conference Center (below) featured briefly. It appears around the 18 minute mark in scenes almost identical to how they appeared in ‘The Yakuza‘ (1974) eight years earlier. It is the location of Hideo’s headquarters and is more famed for its role at the films conclusion. To get there, head to Kokusaikaikan Station at the end of the Subway Karasuma Line (20 minutes north of Kyoto station) and one of the exits leads you directly to the Center.

After a laughable love scene, the area around Sanjo Station can be seen around the 84 minute mark. Just over the road from the station is the Kamo-gawa River and the shot of that and the bridge across it (below) is still very recognisable. 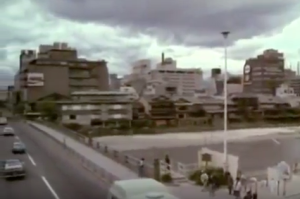 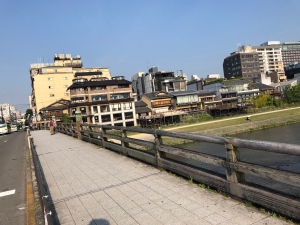 Sanjo Station itself (below) looks nothing like it did in the early 1980’s and there is no footbridge crossing the road like what Rick Murphy (Scott Glenn) and Akiko (Donna Kei Benz, the daughter of Yoshida played by legendary Japanese actor Toshirō Mifune) walk over . 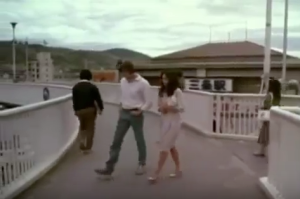 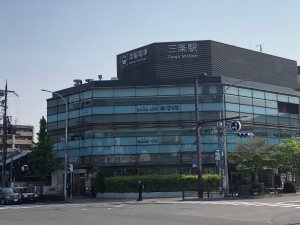