Tokyo Daytripper: The Town In Tochigi Built On A Mountain Of Stone

It is very rare to find an inland town built on a mountain of stone as they are usually found on the coastlines and valleys of Japan caused by earthquakes or volcanoes. That’s not the case though for this Tochigi-town in the north-west of Utsunomiya which is the heart of Oya stone production quarried exclusively in this area.

After arriving at Utsunomiya Station I headed straight down to the bus station but couldn’t work out where the bus to Oya was going from. I went back up into the station to ask at the Tourist Information desk and it proved to be a great idea as they presented me with a special One day Oya sightseeing ticket for 1750 yen which included unlimited rides on the buses along a particular route and entrance to both Oya History Museum and Oya Kannon. It saves 350 yen on the individual prices assuming you only ride on the bus there and back so if you do more bus journeys then you’ll get better value for your money.

With time to kill till the next bus, I wandered over to the other side of the station just to see if the Godzilla statue (below) was outside the gyoza restaurant there. It was. New pictures just had to be taken! 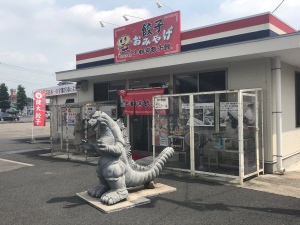 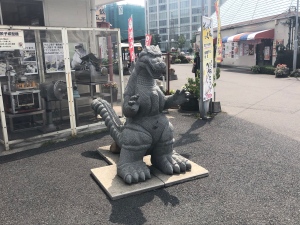 The bus ride to Oya Kannon-mae bus stop took about 30 minutes. I could’ve continued on for a couple more stops to Shiryokan Iriguchi to access the cave museum first but thought it’d be a better idea to board from there on the return to the station as it would be an empty bus then.

The symbol of the home of stone is the 27 metre high Heiwa Kannon Statue. It was carved out of the wall of rock after WWII in aid of world peace, and as a mark of respect for those who died for their country. 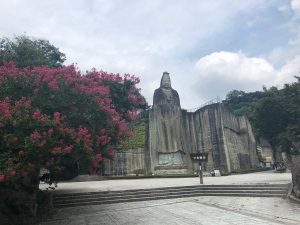 It is an impressive sight as are the sheer walls of stone flanking it on either side. There are steps leading up to the head, five metres in length itself, where there is an observation platform. 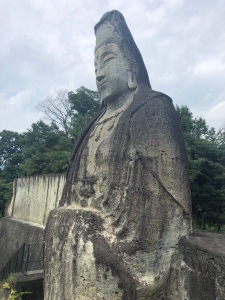 Through the tunnel to the right of the statue is Oya-ji Temple which is situated directly beneath the rock and is very similar to the one I saw further north in Hiraizumi (Iwate prefecture) back in August. 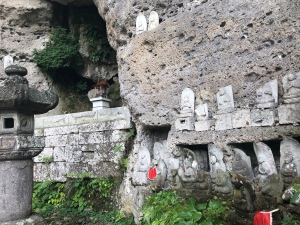 This temple is home to a row of nine finely carved buddha statues, some originally dating back to over a thousand years ago thus making them the oldest reliefs in Japan. The key word in that sentence is “originally” as they were restored over 350 years ago when they were coated with a layer of clay for protection. However, this clay coating was destroyed in a subsequent fire and today they retain their naked stone form beauty.

There is a nice little garden (below) round the corner from the temple hall with a small shrine located on a little island accessed by a red bridge after going through a bizarre looking torii gate. 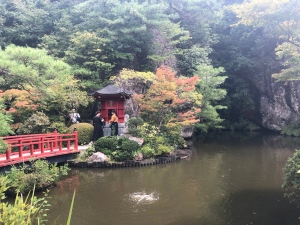 It was about a ten minute walk from there to the museum passing by some beautiful cliffs and strangely shaped rocks (below) in Oya Keikan Park. In fact, much of the area is a picturesque place that has survived, and indeed prospered, as the majority of the mining activities have taken place underground. 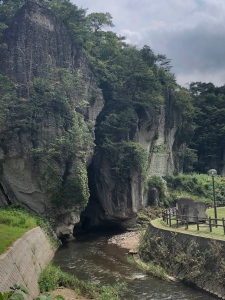 800 yen is what it costs to enter the museum (below) which features displays on manual and mechanical mining methods with the latter introduced about 60 years ago. The main highlight though is of course the old underground quarry that goes 60 metres below ground where the temperature is about 13 degrees. Given how hot it was outside when I went (the end of August), it was a most welcome place to take a break from the crazy summer heat of Japan. 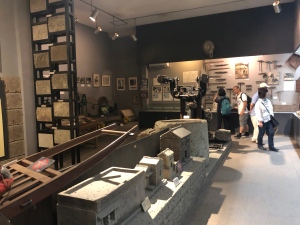 Ahead of my arrival in Oya I really thought that I’d find the kannon more interesting than the museum as such statues are what I usually like to visit. Of course that was great but I was more impressed by the wonderful museum. Sadly, I wasn’t able to capture too many good pictures (below) to back up my opinion! 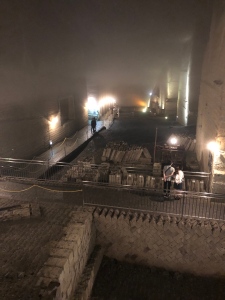 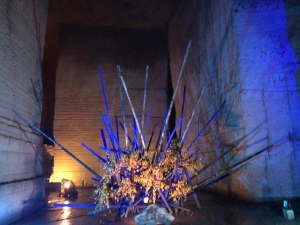 An interesting fact about oya stone is that the former building of the Imperial Hotel in Tokyo (designed by American architect Frank Lloyd Wright) was made from it and was one of very few buildings strong enough to survive the Great Kanto Earthquake of 1923. 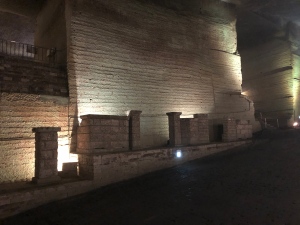 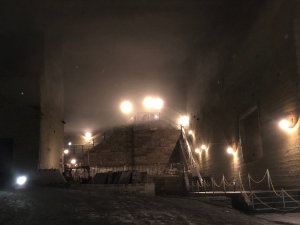 There is a display detailing the many artists (below) who have shot videos or performed in the cavern which is about 20,000 square metres. Not surprisingly I hadn’t heard of most of them. I recognised Japanese rock-band Glay but the big surprise were a couple of picture frames from a Nippon TV ‘Happy Xmas Show’ which featured Enya singing ‘Orinoco Flow‘. 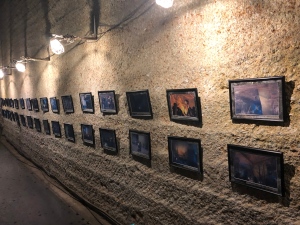 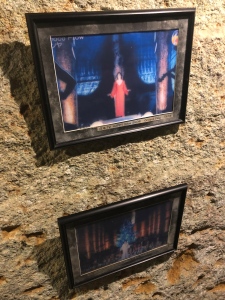 As I left the museum I was most surprised to hear thunder. The forecast I’d seen earlier said it would be sunny all day so I hadn’t expected this kind of weather. Luckily I got to the bus stop on the main road and could shelter under a roof nearby just before the heavens opened up and the rain began to pour down.

The rain had slightly subsided by the time I got a few stops away from the station so I decided to hop off to capture some minor ‘Shin Godzilla‘ (2016) filming locations and to see Futaarayama Shrine. 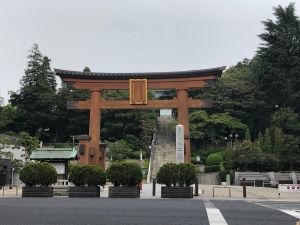 I had no umbrella and the rain pretty much held off for the three locales I tracked down but then it started hammering it down again so I only got to see the shrine from a distance over the road. Given the vast number of shrines (and temples) I seem to get round each year, I think I can survive without having seen this one up close. Besides, I’ll probably see it in the future sometime anyway! This trip was all about seeing the town of Oya though and I’m just glad that I managed to do that before the rain came down.

Click here to read ‘A Day In Utsunomiya (Tochigi Prefecture)’

Click here to read ‘Tokyo Daytripper: Monkeying Around In Nikko’

2 Responses to Tokyo Daytripper: The Town In Tochigi Built On A Mountain Of Stone