Tokyo Daytripper: A Temple Built On The Side Of A Mountain

Back on New Years Day I happened to catch the news on Japanese TV which was showing the different ways people mark the occasion. One of the places that featured was a temple in a cliff where some people had congregated to watch the first sunrise of the year. I was impressed by it’s beauty and immediately asked my wife where it was as I couldn’t read all of the kanji on screen.

Expecting the answer to be some far flung place, I was quite surprised to discover that it was in one of Tokyo’s bordering prefectures. Last Summer I went to a similar-looking place in Iwate prefecture called Hiraizumi which is 450 kilometres north of Japan’s capital. Little did I know that there was such a place much closer to home that could be done in a day trip. Mind you, it’s still quite a long day as the location is way down in the southern depths of Chiba prefecture.

Tateyama city faces the Pacific Ocean at the far southern tip of the Bōsō Peninsula. Daifuku-ji is the name of this temple in the cliff and at the start of March I decided to go and see it. The quickest way to access it from Tokyo is probably to take the Tokyo Bay Aqua Line from Kawasaki to Kisarazu and then jump on the train to complete the journey south on the Uchibō Line. However, that’s also the most expensive way so I took the longer, slower route down the coast on local trains via Kisarazu, Chiba and Akihabara stations.

Nakofunakata Station is actually the closest station and the temple is just under 20 minutes on foot from there. It’s a flat walk too and after a short amount of time I could see in the distance what I presumed to be Mount Funakata which was the place I was looking for. I couldn’t see the temple but eventually as I turned a corner it came into view.

Sheer cliffs surrounded by green trees with a red kannon hall plonked right in the middle of it was the view as I looked up from my street level view. I didn’t hang about and immediately ascended the steps leading to a small platform on top. The ceiling of the hall was pretty impressive as were the exterior wood-carvings. 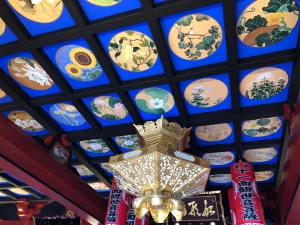 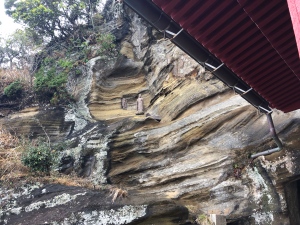 Daifuku-ji Temple (also known as Gake Kannon) was built by locals over 1300 years ago who wanted to pray for the fisherman to be safe and get a good catch. Multiple fires and landslides have meant that it’s been rebuilt several times with the current incarnation nearly 100 years old.

It was a little cloudy when I was there so the views of Tateyama Bay and out towards Izu O-shima couldn’t be appreciated to their full extent but they were still pretty fine. It has to be said though that the cemetery beneath the temple does spoil the views of the area a bit. 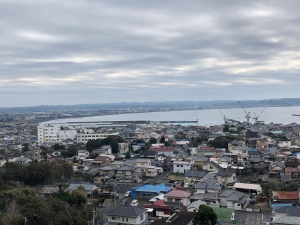 Trains aren’t so regular in these parts so I couldn’t hang around too long as I wanted to be on that next train out of there to venture a little further north to my next spot. As it was, twenty minutes or so was more than enough time to see all that this temple had to offer. If truth be told, much of that time was probably spent trying to take a half-decent selfie from the cemetery! 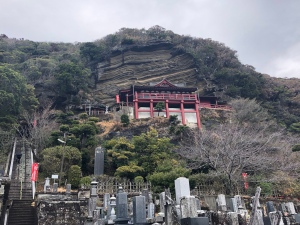 Daifuku-ji Temple (Gake Kannon) is located at 835 Funakata, Tateyama-Shi, Chiba. It is open from 8am till 5pm everyday. Entry is free.

Click here to read ‘Tokyo Daytripper: The Floating Service Station In The Middle Of Tokyo Bay’

5 Responses to Tokyo Daytripper: A Temple Built On The Side Of A Mountain