There have been many films over the years which have focused on negative aspects of Japanese society. The majority of them have been war-related ones but this movie is arguably the one which caused the biggest outcry. It’s a fascinating and hard hitting documentary which plays out like a suspense thriller over the 90 minute duration.

In Japan there is a little town with a big secret. Well, that was the case up until the release of this 2009 film when the majority of Japanese people weren’t even aware of the atrocities of this secluded cove in Taiji, and if it wasn’t for this film, I seriously doubt many of them would have ever known. The film was only given a quite limited release in Japan due to the nature of the content but there was a fair bit of media coverage surrounding it so I guess many people found out that way. 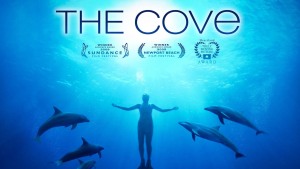 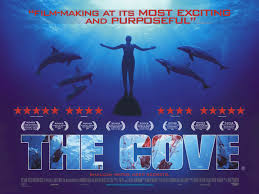 The hunting of these beautiful, intelligent creatures really is a difficult topic to breach with too much balance. Of course in the western world cows, pigs, chickens and so on are also killed to provide meat for humans so one could ask whether a dolphins life is more important than any of those animals mentioned. It seems that many Japanese just don’t see dolphins as being anything special.

The protagonist is Ric O’Barry who captured and trained the dolphins for the television show ‘Flipper (1964) which in many ways led to the popularity of the animals regarding human interaction (hugging and kissing them etc) and performances at aquariums and marine parks all over the world. Ever since he saw one of the dolphins who played Flipper basically commit suicide in his arms due to the stress of being in captivity, he has become one of the leading advocates against cetaceans in captivity, and their preservation in the wild.

Along with filmmaker Louie Psihoyos, they desperately want to expose this secluded cove within the beautiful landscape of Wakayama Prefecture where there is an annual slaughter of thousands and thousands of dolphins from September onwards each year. Having been trapped in the hidden bay, which is heavily guarded by the authorities, a selection are taken for aquariums and what happens to the rest really is quite heartbreaking. They are cruelly and brutally butchered for a meat which doesn’t actually seem to be that popular anyway.

In order to expose it, O’Barry and Psihoyos (well known enemies of the authorities in Taiji), use state-of-the-art equipment. They get an ‘Oceans 11‘ style team together to help get cameras into the area to see what the fishermen are concealing. It was actually a visit to Ryoanji rock garden in Kyoto which gave them the idea of hiding high-def cameras inside fake rocks which were then planted in the area. This is guerrilla-style filmmaking in its truest form.

They also highlight the serious threat to human health by consuming dolphin meat which is found to contain a high concentration of mercury as well as the Japanese government basically donating money to the poorer third world nations in return for their support of it’s whaling industry.

In some ways this is a difficult “movie” to review as everything you see is real so there can be no analysis of the acting. The cinematography is beautiful at times and the story is full of tension, passion and emotion, and it’s played out with great structure to the accompaniment of a good score that fits the occasion and helps stir up emotions real fast.

Overall, it really does portray Japan in a bad light with lots of generalisations relating to “the Japanese” throughout which is a little unfair to say the least when it’s just a select group who are mistreating these beautiful creatures. One should be careful not to think that Japan’s any worse than other countries and it is this hypocrisy and self-righteous poise which does grate with me a little bit.

‘The Cove‘ may well be an inspiring film but is it one-sided? Very much so but it’s well-crafted, very informative and provokes many strong feelings which certainly does make me reconsider the idea of doing things like swimming with dolphins which is always one of the top choices in those things-to-do-before-you-die lists.