Unique Monkey Temple In Tokyo (+ Other Primate-Related Locations Nearby!)

After visiting the sandy-red monkey temple in Saitama it got me wondering if there was anything similar of note in Tokyo. It seemed there was and even better was the fact that it was a fairly short bike ride from the Tokyo Fox Global Operations Centre. Sarutahiko Shrine (saru means monkey in Japanese) is one of those small shrines it’s very easy to miss.

This video from Peter von Gomm on his YouTube channel gives some information about the shrine. He reports that it’s a branch of Ise Grand Shrine in Mie Prefecture which is Japan’s most sacred Shinto shrine dating back to the 3rd century. Shrines are often guarded by foxes, lion-dogs or cows but there are occasional exceptions like the wolf shrine in Shibuya and this monkey one which is situated between buildings near Koshinzuka Station on the Toden Arakawa tram line.

Japanese monkeys are often referred to as being fertile parents so they have come to be symbolic of parenting in this country. Those hoping to start a family go to such shrines and on entering the narrow grounds will be greeted by a pair of guardian monkeys (dressed up like little red riding hood!) on either side of the walkway. 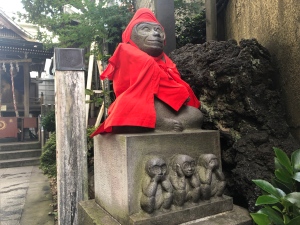 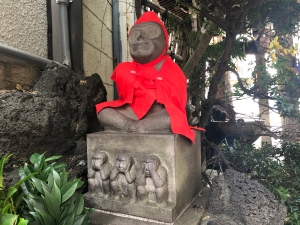 These monkey statues are fairly unique and the base on which they sit features beautiful and intricate carvings of the three wise monkeys which famously embody the proverbial principle “See no evil, hear no evil, speak no evil”. 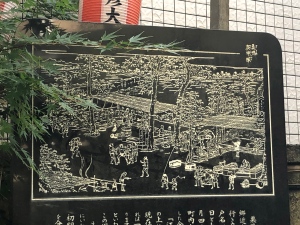 There are two more quite unique places within very short walking distance of this temple which are worth checking out too. Nishisugamo Park is home to a cool beetle slide which featured in ‘Interesting Japanese Playground Structures #4‘ and Ohdai Sazaedo, located in the grounds of Taisho University (3-20-1 Nishisugamo, Toshima-Ku), is a Buddhist cultural facility where corridors to and from do not intersect meaning that the route up and down is not the same. It is a relatively new building and is considered to be a new power spot! It was included in my ‘Tokyo Modern Architecture #3‘ compilation post.

Bonus: Back to monkey business and one of the most famous places for the “Speak no evil, hear no evil, see no evil” imagery is at Toshogu Shrine in Nikko (Tochigi Prefecture) and below are some pictures of a young me from 2007! 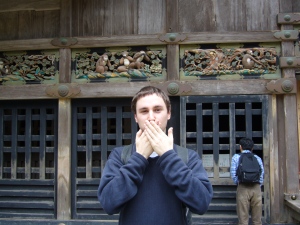 It may be called Monkey Island (in English) but Sarushima (below) in Tokyo Bay (off the coast of Yokosuka in Kanagawa Prefecture) does not have any primates on it. A priest was supposedly once guided to the beach by a white monkey and that’s where the island gets it’s name. The island consists of a small beach on one end which in the Summer is packed full of day trippers having barbecues on the black sand while the rest of the tiny island consists of vegetation surrounding the brick lined WWII tunnels and the remains of artillery positions.

The most famous monkey place in Japan is undoubtedly the Monkey Onsen in Nagano. I’ve never been there but my friend Jack (of Rambling Northerner fame) has and you can read his blog post here.

Far closer to home (if your home is in the Japanese capital!) is Monkey Park (below) on Mount Takao; the world’s busiest mountain. It’s only 599 metres tall and you can even take a chairlift or cable car most of the way up. The glass-walled enclosure houses about 40 Japanese macaques and is situated along trail number #1 not so far from where the cable car takes you. Admission is 430 yen.

Click here to read ‘Tokyo Daytripper: Monkeying Around In Nikko’

Click here to read ‘Tokyo Daytripper: Monkey-ing About On Sarushima’

3 Responses to Unique Monkey Temple In Tokyo (+ Other Primate-Related Locations Nearby!)